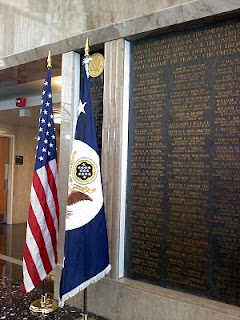 I got the following email today from AFSA:

"The AFSA Memorial Plaque Ceremony, which honors Foreign Service personnel who have lost their lives while serving their country in the line of duty or under other inspirational circumstances, will be held on Foreign Affairs Day, Friday, May 7 at 10:35 a.m., in the C St. lobby of the State Department in front of the west plaque. Secretary of State Hillary Clinton is scheduled to preside over the ceremony. AFSA President Susan R. Johnson will open the ceremony with a brief welcome and Secretary Clinton will present a message from President Barack Obama and pay her respects to the families of the three employees whose names we will be adding to the plaque, bringing the total to 234. Those being honored this year are:

VICTORIA J. DELONG
Victoria J. Delong, 57, a 27-year veteran of the Foreign Service who served as the Cultural Affairs Officer at Embassy Port-au-Prince, was killed on Jan. 12 when her home collapsed during the earthquake. Posted in Haiti since February 2009, she had fallen in love with the country’s people and culture and called this tour the highlight of her diplomatic career. In addition to Haiti, she served in El Salvador, Costa Rica, Papua New Guinea, Germany, Australia, Kuala Lumpur, the Philippines, the Democratic Republic of the Congo and Mauritius.

DALE J. GREDLER
Dale J. Gredler, 43, a Foreign Service Officer at the United States Agency for International Development passed away January 17, 2010, after suffering from cardiac arrest en route from his post in Kazakhstan to receive medical treatment in the United States. He served as a Peace Corps volunteer in the Republic of the Philippines in the 1990s and then worked for the Federal Emergency Management Agency before transferring to USAID in 2001. Dale and his family served at USAID posts in Jakarta, Indonesia, where he was instrumental in reconstruction efforts following the devastating tsunami, as well as at the USAID Central Asian Republics Mission in Almaty, Kazakhstan.

TERRENCE L. BARNICH
Terrence L. Barnich, 56, was serving on a limited non-career Civil Service appointment as Deputy Director of the Iraq Transition Assistance Office in Baghdad, Iraq when he was killed by an improvised explosive device on Memorial Day, May 25, 2009. Originally scheduled to work in Iraq for 11 months following his placement there in 2007, he decided to stay longer and continue to help the Iraqi nation in its reconstruction efforts. Throughout the course of his career, Terry served as General Counsel to the Governor of Illinois, Chairman of the Illinois Commerce Commission and he co-founded a nationally recognized and highly respected consulting firm, New Paradigm Resources Group, Inc. Terry was recognized as an authority on utility and political issues. Sadly, an IED claimed his life.

The solemn ceremony offers us an opportunity to remember and honor our fallen colleagues who made the ultimate sacrifice for their country, and to remind us of the extremely dangerous and difficult conditions that our Foreign Service personnel face today in many parts of the world. Our deepest sympathies and heartfelt gratitude go out to all their loved ones. We ask all members of the Foreign Service community to join us in a moment of silence at 10:55 am EST. "

It's Friday, and it’s the Weekly State Department Blog Roundup’s Three Month Blogiversary - and you're on it!

Here is the link:

(If I quoted your text or used your photo(s) and you would rather I had not, please let me know. Please also be sure to check the link(s) that I put up to you, in order to verify that they work properly. If you would rather that I had not referenced you, and/or do not want me to reference you in the future, please also contact me.)

I knew Dale Gredlor. He is sorely missed at his mission and by his two beautiful little girls and wife. Thanks for sharing and also for attending.