I really should post some pictures of the awesome trips I have been taking, especially my most recent one to Ireland.

But of course, the thing most on my mind is that hellish time in your tour called bidding season.

I think they call it a season so you will look forward to it, like Spring, or football season. I think of it more like allergy season myself.

And so they made some changes this time, which I *thought* would be great. They have shortened the season and put it AFTER promotions came out. You know, so you could focus on jobs at your own grade instead of at your current grade and your grade if you get promoted. All sounds good.

So the promotion list came out while we were on vacation (and it was not a very nice anniversary present) and the bid list comes out on Monday.

And Bureaus are being asked not to create their short lists UNTIL AFTER THE LIST COMES OUT!

Meaning some are making their short lists BEFORE the list of jobs comes out.

Now I confess, I have been using the projected vacancies to make lists of where we'd like to go. Planning is essential as a tandem (even if the Department makes it darned hard to do it). And I will even admit to having sent some emails back in the Spring. This week, I even had a couple of interviews (one for my dream job that I then learned the incumbent is bidding to stay in, so there is one dream shattered...). But short lists? This has me suddenly feeling like I am behind in bidding, and THE BID LIST ISN'T EVEN OUT!

So now I hate this process even more.

Oh and I have always hated it. If you think I exaggerate, just look at posts here with the label: bidding.

Here's one if you don't want to hunt.

In another, I talk about how painful it is waiting for a handshake once all bids are in and considered, which this year is October 31 (trick or treat!).

"On Facebook last night I wrote: "Bidding reminds me of when I was a kid in gym class, waiting to be picked for some team, and fearing I'd be picked last."

And my friends were quick to respond:

Friend 1: And the game is dodge ball.

Friend 2: Even worse, because you don't know what the game will really be, who will be on your team when you get there, or even who, exactly, is making the decision.

Friend 3: it's worse cause you don't even know if they've secretly given away all the slots on the team!

And all that was in addition to responses of "Word," "Exactly," and a plea to just put us back on directed assignments.

And we aren't even to that point yet.

And the even more fun part is that you could end up with no assignment, waiting, wandering the halls after your tour is done, looking for a job. Picture hollow-eyed zombies shuffling through long white hallways filled with suited bureaucrats whispering and not making eye contact.

Okay, that is how I picture it anyway, and if fills me with dread. I do know some who just don't bid and wait to see what good jobs pop up when there are people with jobs looking for good candidates instead of the other way around. I lack the internal fortitude for that.

It all feels a bit like middle school, waiting to be asked to the dance. You feel like you are sending notes across the classroom. 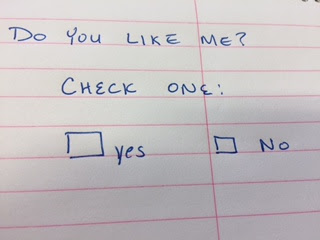 And then you get a little positive response, but you aren't sure you were understood, so you send another: 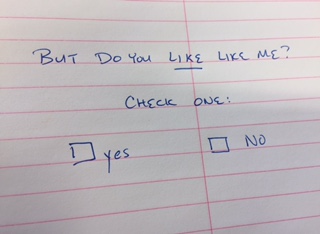 And of course, this is always a possible response: 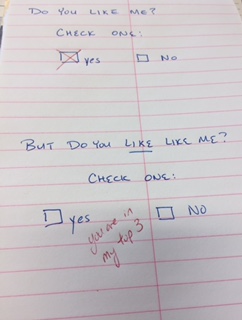 Which of course means, you are the #3 candidate, with two ahead of you. They want you for the dance...er...job...only if their top two say no.

It leaves me feeling anxious and questioning my worth.

It also leaves me feeling unsettled. There used to be an FS blog called Six Months of Settled. The idea is that you get to post and it takes you six months to really settle in, get over culture shock and adjust to your new place. But for two year tours, you start bidding after a year at post.

And by bidding, you start focusing on the next assignment, and you feel unsettled all over again. And you don't feel settled again until six months into your next job. So that is all we get: six months of feeling settled.

This is where I am now. Unsettled. Anxious. And hoping not to get hit by a dodge ball and turned into a zombie at the Mother Ship.