Posted by Digger at 6:24 PM No comments:

I meant to bring this to your attention when it came out last week.

The Blade did a nice piece on Randy Berry, the new LGBT envoy for the Department. You should go check it out:

Randy Berry: LGBT envoy ‘an innovation’
Posted by Digger at 12:48 PM No comments:

I want to congratulate GLIFAA on taking on one of the more serious issues facing LGBT diplomats today, the issue of accreditation.

Basically, when a diplomat is assigned to a country, that country also gives a type of diplomatic immunity to the diplomat's spouse. If the country refuses, as is too often the case if the diplomat has a same-sex spouse, that spouse goes to post at his or her own peril.

GLIFAA President Selim Ariturk was interviewed on the issue for an article called Gay Diplomats Say State Department Is Failing Their Families.

And they are right.

For those diplomats who cannot get their spouses accredited to a country, they must generally either break their assignment or go to post alone. The spouse can visit, as I did when my wife was assigned to Azerbaijan, only for one month at a time, or whatever is allowed by that country's tourist visa, at which time they must leave the country with no guarantee they will be allowed back in.

Now on the one hand, that is fine. Most Foreign Service Officers do what are called "unaccompanied tours," which is where the spouse cannot join the diplomat. But you see, there are a series of boxes we all need to check in order to make Senior Foreign Service, and one of those is to do an unaccompanied tour. But it only "counts" if you do it at places specifically designated "unaccompanied." So if you are an LGBT diplomat forced to be apart from your spouse because a country won't accredit him or her, you still need to do another one to be considered for our senior ranks. And that isn't fair. The Department can and should choose to make these tours "count."

But what is more, in many countries, the Department could use a stronger hand. No, you are not trying to change that culture (though working for LGBT rights worldwide is a foreign policy priority of the administration), we could say fine, for each legal spouse of ours you refuse to accredit, we will not accredit one of yours. Reciprocity, a tried and true method for getting our people treated equally. I can't imagine that we would stand for a country denying accreditation to a spouse based on race, so we shouldn't stand for it here.

As it is, officers are having their careers harmed by an unwillingness by posts, HR or the Department to find a way to make it work. They are unable to accept jobs that would be good for their careers (don't mistake a reference to a "plum" assignment as meaning a cushy one...for example, I consider my onward assignment to Kosovo to be a plum assignment because the work will be interesting, important and good for my career advancement).

For example, the article says "In one case, a diplomat who asked not to be identified out of fear of retaliation told BuzzFeed News that since joining the foreign service in 2010 he has twice been all-but-promised a plum post in a country where they needed his specialized language skills only to be reassigned at the last minute because of this country’s policy toward same-sex partners. When this first happened in 2011, the diplomat said that his State Department career development officer told him, 'There aren’t a lot of places that will accredit your same-sex partner, so if you choose to continue in this relationship it will adversely affect your career.'"

Even more senior members of the service have been affected. My wife and I aren't affected by this because we are a tandem, meaning we each get diplomatic accreditation in our own right and not based on our marriage. But the Department can and should do more to help those not as fortunate as we are.

One a side note, poor Selim and GLIFAA got absolutely flamed by GLIFAA members for doing this interview. People said they should apologize to Secretary Kerry and to Deputy Assistant Secretary of State for the Bureau of Human Resources Phil Lussier because the Department of State is a great place for LGBT people to work.

They are right that is it s a great place to work for LGBT people, but make not mistake. It is a great place too work because GLIFAA pushed for equality and fairness for LGBT employees. Selim was with me when we delivered the document on Secretary Clinton's first day, a petition from our colleagues for equal treatment for LGBT employees and a list of changes Secretary Clinton could make with the stroke of a pen. That document, based on the hard work of GLIFAA, is what led to changes that have continued through the group's efforts.

So BRAVO to Selim and GLIFAA for continuing to demand more from the Department in terms of treating all its employees equally. Well done!
Posted by Digger at 12:00 PM No comments:

No, It Isn't Enough

If you have read this blog for any length of time, you know I am concerned with the lack of a out lesbian or out person of color Ambassador. I discussed it most recently regarding the gathering of all the LGBT Ambassadors at the Newseum.

Turns out, I wasn't the only one who noticed.

Dr. Marcie Bianco wrote a piece on mic.com called This Photo Represents a Major Problem in the LGBT Rights Movement.

She says in the article, "White men running the show is not "progress." It's more of the same. But when its leaders better reflect the greater LGBT movement, whether they're appointed by members, nonprofit boards or the government, true equality can become attainable for everyone."

She isn't wrong, While I would not say it is "no" progress, it is certainly not enough progress. We can do better than this.

Ironically, I would not have seen this article had it not been posted on the GLIFAA Facebook page. I say ironically because it was posted by someone who was angry that she said this wasn't progress. He ranted about how it was great progress, and when my wife and I dared to object (as did many other lesbians to us privately), we were absolutely flamed over it. How dare we question the good work of these ambassadors (we weren't). How dare we look after our own self-interests (we weren't). We were merely pointing out that Dr. Bianco is right, it isn't enough.

The person who flamed us (and attacked us personally...I continue to be disappointed that those comments have been allowed to remain on the GLIFAA page), said that six of the Ambassadors had people of color for spouses. That is great, but all of the married U.S. presidents had female wives and that doesn't mean that the Presidency was attainable for a woman. Likewise, African-American men got the vote long before their wives did. I suppose their wives should have just been content with "progress" made by their community and not continued to push for rights of their own.

The fact is that racism and sexism still exist, and the picture of the six gay white male ambassadors highlights that. For contrast, I'd like to point out another photo, taken at the Chief of Mission conference recently. It is a picture of all of the female Ambassadors who attended. 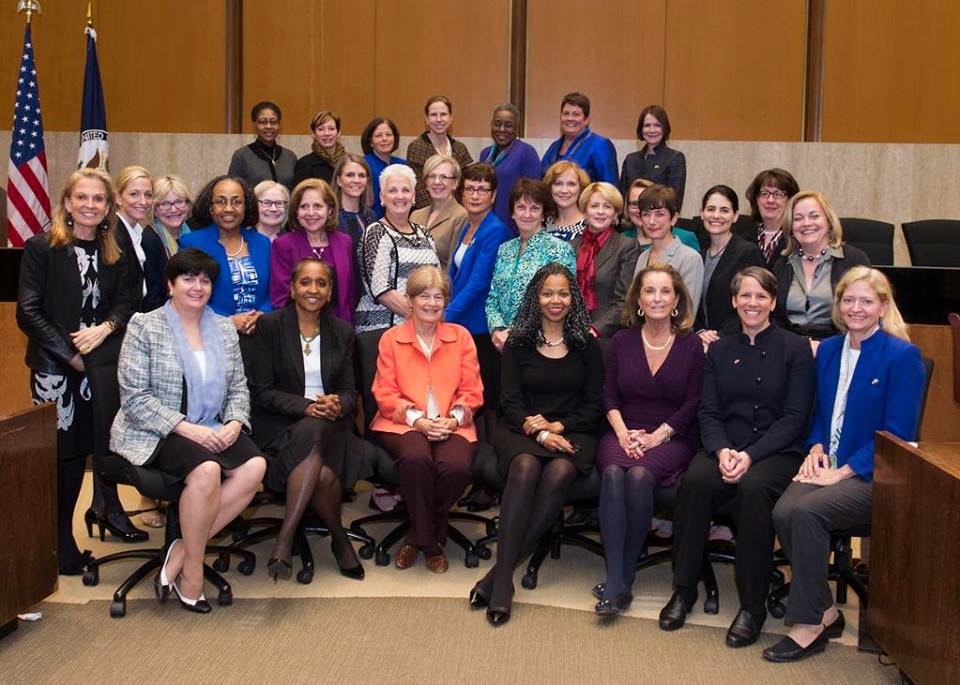 It is a great picture. But I'd like to point out that there are more gay white male Ambassadors than there are women of color in this picture.

Diplopundit, in a nice piece on the number of female ambassadors, points out that 31.6%, or 116, of the ambassadors appointed by President Obama have been women. Of that, more than 70% are career appointees (meaning they are FSOs, not political appointees). That number isn't awful considering that the number of women in our senior ranks is somewhere just under 39%.

But the number of women in our senior ranks is an issue in itself. I hope time will sort that out, as women are now the majority (by a slim amount) of those entering the service, but a report I read recently said women are also more likely to leave (and not just "to have families." Perhaps the appearance of lesser upward mobility than their male counterparts plays a role in their looking elsewhere?). So who knows?

And as I have mentioned before, I know of only two out lesbians who have reached the rank of FS 01 in the service, and none have made senior Foreign Service. None.*

And that is a problem no matter how many gay white male ambassadors we have.

*I have heard rumors of some career lesbians in the senior ranks, and perhaps even ambassadors. But if they aren't out, that doesn't help.
Posted by Digger at 2:15 PM No comments: