The past couple of weeks have been fairly hellish.

We have had two CODELS, McCain and Bachmann. Plus, we have had two major conferences, the Lennart Meri Conference and the Freedom Online Coalition ministerial. Each conference brought high level visitors, including our Ambassadors to NATO and the OSCE and our A/S for Democracy, Rights and Labor. Plus, the Under Secretary for Management was here at the same time.

None, not one, of our visitors was the nightmare that visitors can sometimes be, but we are a small embassy and these visits involved lots of moving parts, lots of juggling. It has been exhausting.

Of course, a big part of the reason for all this is that with the crisis in Ukraine, suddenly everyone is interested in Estonia. Even my family members who thought when I got assigned here that Estonia was in Africa now know exactly where Estonia is.

So in addition to all the visitors, we also had lots of military stuff going on. Like the rotation of the Baltic Air Policing from us to the Danes, marking the first time that the Estonian air base will be used for that mission. Previously, all the flights have been done out of Lithuania.

And then there was this:

The 173rd Airborne sent a company to Poland, Lithuania, Latvia and Estonia. They arrived here on Monday. With the way Russia has been behaving, everyone is happy to see them!

I actually got the be there for this one. I am exhausted, but that was a "man, I love my job" kind of day!
Posted by Digger at 4:00 AM No comments:

I am going to come out and say it.

I HATE the term "trailing spouse."

The Foreign Service is one of the last bastions in many cases of what we think of as a 50s marriage. Dad works, mom stays home.

That never really existed, and "Mom" didn't "stay home. She worked her a$$ off.

The Foreign Service though, can make it difficult for the non-employee spouse to have a regular career (unless you are a tandem couple). So the non-employee, male or female, must try to get embassy jobs or try to have a portable career. It is hard, sometimes impossible.

I joined so I wouldn't be a "trailing spouse." Gave up a career I loved to be with my wife. I don't regret it. I love my job and my life.

"Trailing Spouse" is the hardest job in the service.

The Huffington Post has a nice piece on trailing spouses and how hard it is for non-employee expats (not specifically about the Foreign Service).
Posted by Digger at 3:44 PM 1 comment:

So apparently Robert Mugabe is threatening to expel from Zimbabwe any Western diplomat who promotes gay rights.

“We will never have that here and if there are any diplomats who will talk of any homosexuality, just tell me. We will kick them out of the country without any excuse. We won’t even listen.”

You know, we normally try NOT to get PNG'd (declared persona non grata and expelled from our host country) in this line of work.

I would wear that PNG like a badge of honor!
Posted by Digger at 3:27 AM No comments:

Al Kamen with the Washington Post had a nice piece in "In The Loop" on Richard Hoegland. Often, Kamen makes me cringe...he often has things to say about the State Department that are profoundly unflattering. Sometimes justified, sometimes not.

In my humble opinion.

Let's just say that when they tell us in A-100 to be careful what we say and do in public and to make sure it passes the Washington Post sniff test (would you want it in the Post), they mean would you want to see it in "In The Loop."

Ambassador Hoegland was one of the founding members of GLIFAA, Gays and Lesbians In Foreign Affairs Agencies. And he is one of the ones that made sure that people like me can do our jobs without worrying that we will lose our clearance over our sexual orientation.

Hoagland recalled a time in the 1990s when his security clearance was taking a long time to be renewed, and he suspected it could have to do with concerns about him being gay. He went to the head of diplomatic security and threatened, “You have no reason to deny my security clearance. I want it on my desk in one week, or I’m going to The Washington Post.”

He said that he had his clearance one week after that fateful confrontation.

He also said that he wasn't there to rehash ancient history. He said:

Despite such advances made worldwide, much remains to be done to promote and protect the rights of LGBT persons. It is the duty of American diplomats to shape foreign policy to promote human rights for all persons, regardless of sexual orientation or gender identity, especially in the far reaches of those countries that prove most hostile towards them. We rely on our strong Department of State leadership to back these efforts, and ensure that our diplomatic corps prioritizes human rights for all.

It is certainly my priority.
Posted by Digger at 3:29 PM No comments:

Email ThisBlogThis!Share to TwitterShare to FacebookShare to Pinterest
Labels: GLIFAA, In The Loop, Richard Hoegland

Spring is awesome...it starts warming up (I hate hate hate cold weather...love Estonia, but really winter sucks), birds start singing, flowers start blooming. And since I don't really suffer from allergies, there is just no downside to spring.

Two things are bad about spring.

Taxes, which I wrote about yesterday.

For those not in the State Department, this means Employee Evaluation Report. It covers the period from April 16-April 15 and is due May 15. It is the time when you write about how you single handedly saved the world and your supervisor says that you are the most awesome officer ever (except for every other officer who is also the most awesome officer ever). Everyone walks on water in EERs. As I have said before, you not only have to walk on water while turning it into wine in order to stand out.

The people who are best at it, and therefore more likely to get promoted, are the ones who are best at taking credit for everything and for general self-aggrandizement. Those who like to give credit to the team, who also tend to be the kind of folks who you would want to work with and for, tend not to be as good at it.

I hate EERs. I feel dirty writing them.

I would almost like to go back to the old way of doing them, which you can check out from the form below and the post I wrote about it four years ago: 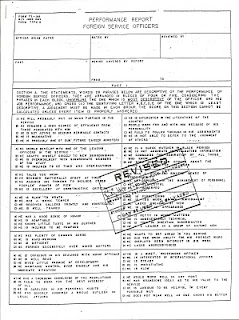 At any rate, it seems particularly timely given our (me and No Double Standard) recent discussion of EERs and the like. What my wife found was Form FS 316, the Performance Report for Foreign Service Officers, Revised June 1949 (and then according to a stamp on the page, again revised in June of 1958).

Now by Foreign Service Officers, the form means male FSOs...there are no feminine pronouns on the form.

Also missing from the form are the big blank boxes you have to fill in (there is only one for a summary and recommendations). Not even a "suicide box." No, instead, it is a bunch of multiple choice descriptors and the rater is to underline the one which is most descriptive of the officer and his job performance and to x out the letter of the one least descriptive.

So an example is:
A. He will probably not go much further in the service
B. He demands a high degree of efficiency from those associated with him
C. He is not active in seeking desirable contacts
D. He is imaginative
E. He is probably one of our future career ministers.

You get the idea. As I said, SHE is not an option. But at least I couldn't find the part where they graded an officer on his wife's ability to host social functions.

So with that in mind, I thought I'd share some of the funnier descriptors:

*He shows little taste in his clothes. (Maybe this is why Secretary Powell had to put out the memo saying no flip flops or sparkly tank tops)

*He is inclined to be pompous (I wonder if they consider this a good thing or a bad thing?)

*He is careless in his personal habits (this is the guy who got dust on his pants and the dust stayed there for the whole season...he wore them EVERY DAY).

* He becomes emotionally upset at times. (What, screaming is bad?)

* He gives little promise of development (And yet still gets promoted)

* He is a clock watcher in slack periods (How is this a bad thing?)

* He is petty in minor matters (and in major ones, he melts down completely)

* He is slow (How often have you asked how someone passed the FSOT?)

* He bores intelligent people (this is my personal favorite)

* He has an exaggerated idea of his own importance. (I am pretty sure I worked with that guy).

* He has a tendency towards hair splitting (is this a comment on his appearance?)

* His personal appearance is an asset (well thank god for that)

* He is overbearing (In the Foreign Service? Shocking!)

* He impresses you as not being fully alive to the problem you are discussing (or maybe just not fully alive?)

You know, as I read this through, maybe we should bring it back. Of course, there'd be tons of lawsuits ("You can't call me stupid! Everyone is special!"), but there'd also be some honesty in the EER. Really all you need to do is add a feminine pronoun.
Posted by Digger at 6:20 AM No comments:

Email ThisBlogThis!Share to TwitterShare to FacebookShare to Pinterest
Labels: EER

For the first time, we were allowed to file as a married couple.

We did of course have to pay the "marriage penalty." I am okay with that for equality, and for the ability to protect my family (even when she is singing "What Does The Fox Say?", which she is as I type this).

But the extra that I am not okay with paying?

Having to get an accountant to do our taxes because they are now too complicated for me to risk doing.

And they are too complicated because we file as married federally and in Maryland, where we are now residents (yay! Full citizenship!).

But in Virginia and South Carolina, where we own property, we must file as single, as strangers. As though I picked a random person to buy property with.

And in order to file as single, not only do we file two returns instead of one, but we also must do FAKE single federal forms in order to figure out what we owe as single people. Which, of course, we are not.

South Carolina and North Carolina have been running this awareness campaign called #Married364. As in, we are married every day of the year except tax day.

And as one of my best friends, who is also legally married, on that day, we are forced to lie. 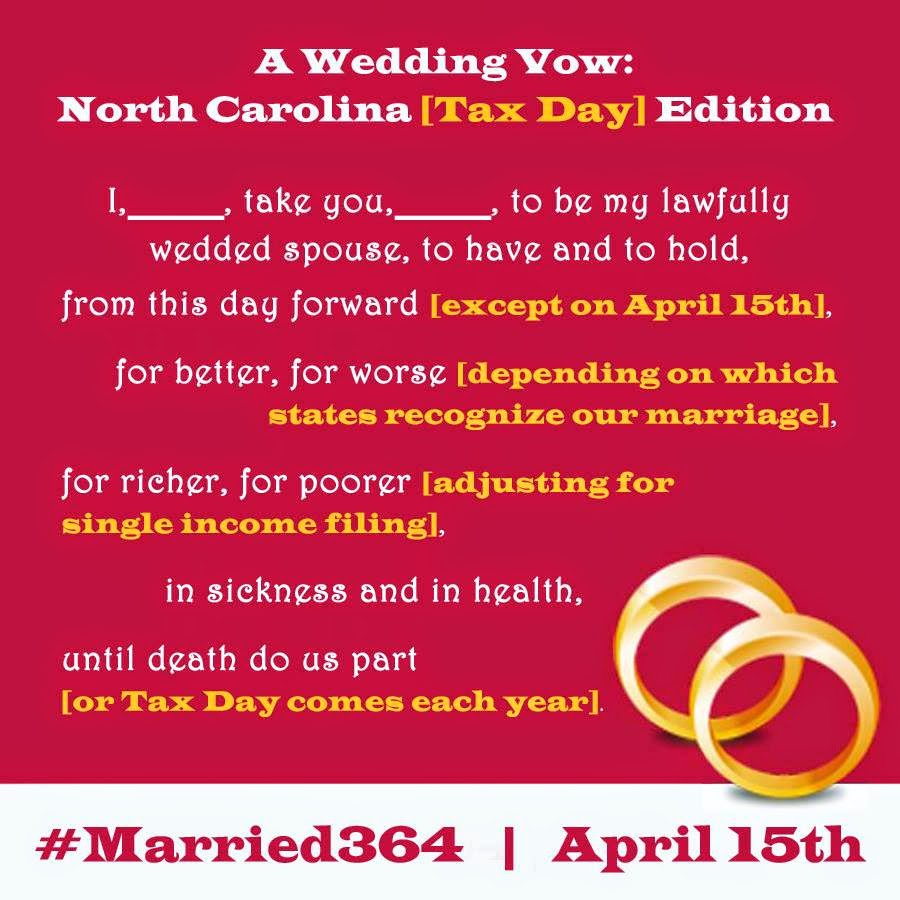 So the preparations have truly begun.

We have just three months left in Tallinn.

I have begun my list of what needs to be in the suitcase, the carry on, and the UAB.

But of all that we have to take home with us, what always concerns me most is the pets. This is why I started the process of getting the CITES permit for my bird several months ago (I have the Estonian one...still waiting for the U.S. permit).

Last week, I took my dog for her shots, and today it was the cats' turn.

Now they are all ready to go...they even have their passports!

Posted by Digger at 5:51 AM No comments: