Foreign Policy had an interesting piece written by retired FSO Joseph Cassidy about how to fix the State Department.

He says: "A hypothetical graph of the State Department’s influence through history would have its obvious high points — William Seward serving as Lincoln’s confidant and advisor, George Marshall rebuilding Europe after World War II, James Baker organizing a global coalition in the first Gulf War and consolidating post-Cold War Europe — but fewer of late. With the rise of large, permanent defense and intelligence bureaucracies after World War II, and the more recent increase in size and stature of the National Security Council begun under Henry Kissinger and expanded since, State’s role is ever more constrained. Its regional and thematic policy experts are often muscled out of big decisions by other parts of the executive branch.

That is a waste. State’s impressively smart, hardworking, and principled employees could be investment bankers or tech titans or big firm lawyers (and some have been). Instead, they choose public service, with its lower pay, fusty hierarchy, and often considerable danger. American diplomats abroad are busy assisting U.S. businesses and American citizens in trouble, investigating war crimes, tracking corruption and terrorist financing, and representing Washington in treaty negotiations. Meanwhile, their colleagues back at Foggy Bottom toil in an organization that is neither agile, efficient, strategic, nor particularly relevant."

You can read the whole piece here.
Posted by Digger at 4:18 PM No comments: 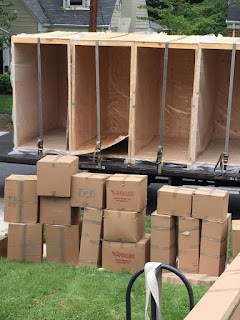 Our UAB and HHE are on their way. My wife will be in two days.

Those of you who know me from the real world (and, who are we kidding, from Facebook, though to be fair, all of my Facebook friends are people I have real world ties to), know that my language test did not go well. Almost there is not what you want to hear about 43 weeks. So our transfer, including this past weekend's packout, has become maddeningly more complicated than it needed to be.

My wife and I were supposed to leave together (though on different flights because the main airline the Department uses doesn't allow parrots and the cost construct for that flight was pretty expensive, so my wife will use the regular flight). We were supposed to leave on Wednesday. This Wednesday. So we arranged our packout for this past weekend.

It was supposed to come after a week of leadership training and a few days off (read, days organizing) for me and a week off and a few days off for my wife (also for organizing). But with the test issue, that didn't happen. Instead, my week of leadership was exchanged for more time in language class, because it turns out that it takes four weeks to have your test reviewed, to pursue a language waiver, or to take enough additional language training to retest.

I am pursuing all three, in case you were curious. My plan now is to head to post on August 5, two weeks after my wife gets there (and no, this doesn't means she will unpack and set stuff up for us...she didn't unpack her shipments in Azerbaijan in the three months between her departure for post and my first visit there. Nesting is not really her thing.)

So I am still in language. No vacation for me. Meaning I couldn't help much with the packout of the UAB and HHE. Also meaning that the packout for storage and the car had to be postponed until August 3. So there has been much more stress than there should have been. I feel far less on top of this PCS than I have previous ones (though the movers were impressed with my labeling system...stickers on everything for UAB, HHE and storage since there wouldn't be two of there to organize and then supervise).

So our UAB and HHE are on their way to Kosovo, and my wife will begin her journey with one of our cats in two days. I have two more weeks in language and I retest on July 31. It is possible that either the waiver or a positive review of the test will come through by then (because I actually felt like I did better than my score on the test, but that is another story...), but it is already too late to change anything. So even if I get the waiver or find I passed at least one part of my test, I will still retest in the other part and leave on the 5th (Me, the dog, one of the cats, and the parrot. Fun.).

And if you are the religious sort, I wouldn't mind any prayers or positive energy you want to send my way. I am already carrying around a four-leaf clover my mother found in West Virginia. Can't hurt, right?
Posted by Digger at 4:12 PM 2 comments: