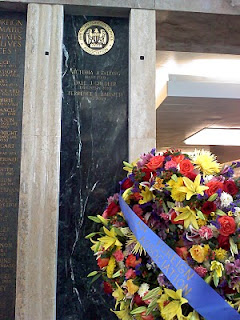 SECRETARY CLINTON: Thank you, Susan. And thanks to all of you for being here and joining us for this occasion of remembrance and gratitude. I’m pleased that Administrator Dr. Raj Shah and other leaders of our foreign policy community can be with us today.

Let me start with a message from President Obama: “I send greetings to all those celebrating Foreign Affairs Day 2010 at the Department of State and serving around the world. Today, we recognize the many Foreign Service professionals who advance our national interests through their work. On behalf of a grateful nation, I thank you for your dedication to building a better, more secure, democratic, and prosperous world.”

We know that your work does not come without sacrifice and danger. And today, we solemnly remember three Americans who lost their lives this past year. Terry Barnich, a dedicated, very smart professional was returning from a water treatment facility inspection in Fallujah, Iraq when he was killed by a roadside bomb on May 25th, 2009. Terry arrived in Iraq in 2007, and although he was only scheduled to be there for 11 months, he stayed longer to continue helping the Iraqi people rebuild their own nation.

The January 12th earthquake claimed the life of Victoria DeLong in Haiti. She was a Foreign Service officer with 27 years of service, and she was well known and well liked by all with whom she had worked over those years. And in Haiti, she was particularly committed to strengthening the bonds and deepening understanding between the American and Haitian people.

Dale Gredler was a professional USAID employee. He was known by his colleagues to be so dedicated to his work. He leaves behind these two beautiful young daughters. And I hope that they know that he served his country by trying to help other people have a chance for their own children to have lives of fulfillment and success. He died of cardiac failure on January 27th while traveling from his post in Kazakhstan to obtain treatment back home here in America.

Terry, Victoria, and Dale join the ranks of those before them on the memorial plaque. And their commitment to caring about others beyond themselves, their families, and those who were close by – in fact, taking their training and their commitment to the entire world, to improve it, to make it safer, to give others the same chance we enjoy here in the United States. That will truly be their lasting legacy.

I think we know what a debt of gratitude we owe to all who serve. And we know, too, that each and every one of them will have family members and colleagues who remember them. But certainly for us here at the State Department, we will remember them as those who went on our behalf, who worked tirelessly to make a difference. And I want to especially express our condolences and our gratitude to their family members because when someone goes off to serve in the State Department or USAID, a family serves as well. The family may not be there physically – although very often, it is possible – but the family is there in sprit, supporting that work. Sometimes family members say, “You want to do what? You want to join what? You want to go where?” But we’ve all learned that when someone has that in their heart and soul, to serve, it’s better just to send them with Godspeed and to be grateful that they are doing the work that they love.

So when we think about these three whom we’ve lost, I just want to say a word about the families. When Victoria was not organizing cultural exchanges, she was volunteering at a Haitian orphanage. She loved children. Her sister Rita, her niece Jennifer, and her brother-in-law Mike are here with us. And I want them to know that we will carry on her commitment on behalf of children everywhere to make sure that they have that chance to fulfill their God-given potential.

Dale’s wife, Caroline, and young daughters Allison and Sarah are with us today, as is his mother, Alice, his sister, Debbie, and other members of the Gredler family. They know better than anyone how committed he was to public service. One of Dale’s old embassy softball buddies from Jakarta sent me a note recounting a conversation they had shortly after the birth of Dale’s second daughter. Dale wrote, “I am the luckiest man alive.” A few days ago, their team, the Jakarta Beerhunters – (laughter) – gathered for a reunion and entered the Southeast Asia Slow-Pitch Softball Tournament. And they all wore Dale’s old number, 73, and they ended each game by cheering “3-2-1, Dale!”

Well, that’s the kind of passion that Terry Barnich would have recognized because, in the best tradition of our volunteer nation, he left his established career and community to help the Iraqis rebuild. His brother-in-law, Jack, and his sister, Rochelle, and a number of his friends are with us today. What an incredible example of someone who got up and went to serve. And he is so well remembered in Iraq by Americans and Iraqis alike.

So these three talented and brave Americans represent the best of our country and this Department and USAID. By adding their names to the wall today, we recommit ourselves to honor their memories and carry on their work. And we thank them profoundly for their service. Thank you all, and may God bless their memory.

(The plaque is unveiled.)

(A moment of silence is observed.)
Posted by Digger at 2:58 PM

Why does the plaque for Dale Gredler say "Indonesia 2010" while the Secretary's comments indicate that he died while serving in Kazakhstan?

Good question. I know he served in Jakarta, but I'm not sure why that is the post that was listed. Maybe he was on TDY.