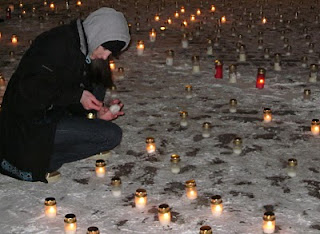 It is no exaggeration to say that there is not a single Estonian family untouched by the deportations. Between deportations, executions, and conscriptions into the Red Army, as much as 10% of the country's population disappeared. It would be like losing 35 million Americans...

In the plaza here in Tartu, there is a makeshift memorial I wanted to share with you. I promise to get back the the Amazing Race tomorrow. 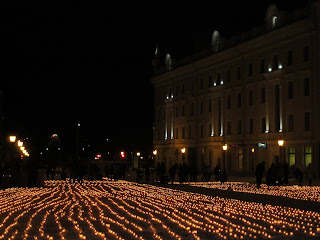 March 25, 2011
Sixty-two years ago today, Soviet forces that illegally occupied Estonia and its Baltic neighbors launched an unprecedented wave of deportations. The human scale of these deportations is unfathomable; within three days, nearly three percent of the Estonian population had been sent to Siberia. Early Soviet mass deportations and executions had been aimed at destroying Estonian society, culture, production capabilities and defensive infrastructure. This wave of deportations was crafted to break the stiff Estonian resistance to collectivization; it was targeted at the citizenry and included vastly disproportionate numbers of women and children. The train cars that bore over 20,000 Estonians east included a one year-old infant and a ninety five-year old woman.

History bears testimony to the indomitable Estonian spirit and the tenacity of this nation's culture. Today, Estonians will gather to reflect on their unique and oft-harsh history. Our Ambassador and Mrs. Polt will participate, laying a wreath and lighting candles in Tallinn's Freedom Square, in memory of those who suffered during this tragic time. In a society that has come so far since the restoration of its independence, memories are never too distant. Together with Estonia, America recalls the past and lives for the future.
Posted by Digger at 3:23 PM