I was too tired last night to write about our visit to Juneau, but it was lots of fun. I knew it was going to be a good day when we pulled into port and there was the Time Bandit.

Now for most sane people, this means nothing. But for my wife and the billions of others who apparently watch Deadliest Catch, this is a very big deal. She has a serious addiction to the show. She once asked me if an episode coming on was one she had seen before and I said, “Yes, this is the one where they catch some crabs and that guy gets hit with the crab pot.” And she said, “Oh yeah,” to which I cried, “They are ALL that episode!”

I seriously can not tell them apart. But she can. And the Time Bandit is one of the boats on the show. So she was very happy.

Our shore excursion for the day was a trip to the Mendenhall Glacier and a boat trip out to see whales. We saw lots of them, including one that leapt into the air and splashed down. That was pretty cool. We also saw an island packed with Stellar Sea Lions who were enjoying a rare sunny day. We were enjoying it too. 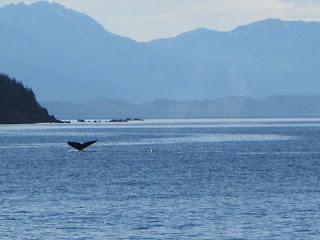 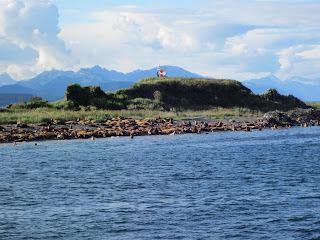 We spend a lot of time out on the water, and I almost wish we had cut that trip a little shorter so we could have had more time on the glacier. The little we got to hike there reminded me of how much I miss hiking. We need to go more. My wife reminded me tonight that she actually started running not for marathons but to make hiking more fun. There was a waterfall that we could have hiked to given more time, and a second one coming out of the glacier that we could have gotten closer to.

Oh well. Next trip. One think being in the Foreign Service has taught me is that these sorts of trips don’t have to be once in a lifetime.

Today we docked in Scagway, Alaska. We had to leave really early for our trip to the Yukon Territory in Canada (we were supposed to leave at 10:50 but there were only 4 people from our ship signed up, so we joined the group from the Norwegian Star, including the owners of the Morgan Winery in Monterrey, California). It was my first time in Canada (I attempted to go once with my ex but we weren’t allowed in. I had a New York Drivers License and SC plates, which of course made the border guards think we were drug smugglers. We said we were going across to the Canadian side of the Mohawk reservation and he asked if we were Indian. I answered that I was, and so he said he had to run a check on her but that I was free to go (Indians are allowed unrestricted access to the reservation). Turned out she had bounced a check when she was in college and it had been turned over to the police, making it a felony in Canada. So she wasn’t allowed in).

So anyway, we made our way to Spirit Lake Lodge near Carcross (it used to be called Caribou Crossing, but they kept having their mail sent to other “crossings” so they changed the name). There we met Marvin and Diane, our guides. They took us on a one hour horseback ride (Diane had her two Pomeranians in her saddle bags…they apparently love to ride) followed by a one hour canoe ride on Spirit Lake. Then we were treated to a nice lunch followed by a scenic ride home. Our driver Paul was great. 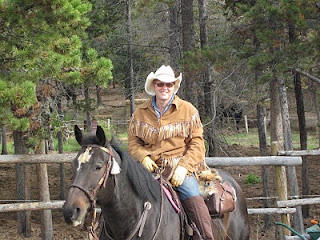 Diane and the Pomeranians

Back in Scagway, we wandered through the town, which is mostly for the benefit of the tourists. Only 900 people live in Scagway. Today they were joined by 10,000 tourists! I was really happy for our little nine person excursion! 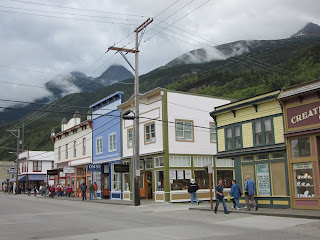 Downtown ScagwayWe just left port, and are headed to Glacier Bay, which is only accessible by boat. We’ll be there in the morning when we wake up.