We got back on the boat yesterday at about 1 in the afternoon, so I have no real excuse for not writing yesterday other than laziness.

We spent yesterday morning in Ketchikan, the salmon capital of the world (or so they told us). We took a tour that started at Saxman Native Village, where our guide told us about some of the totem poles they have there. I wish we could have spent more time there, but I was trying to pick a tour that offered some physical activity in addition to sight seeing. So I picked one that advertised a short nature walk on the way to a cannery tour. Well, by short, they meant like two minutes. The tour was a bit heavy on the cannery tour, which I was not really so interested in. I mean, do you really want to go from watching the salmon swim upstream outside the cannery to watching a video of them chopping the heads off of the salmon at the cannery. Ick.

Anyway, we traveled to the village and cannery by bus but back to the ship by boat. We finally saw a bunch of eagles, and I even got some pictures of them. And they had apparently had four inches of rain the day before, so we saw places where whole parts of a hill had slid into the water.

Back in Ketchikan, we wandered around town for a bit. We saw salmon trying to swim up a rapid at Creek Street. That area is also known for having been the red light district of the town. We had some lunch (guess what we ate…) and got back onto the boat in the pouring rain. This area is actually a rain forest, so we have really lucked out with all the sunny weather we have gotten. We lined up to go back onto the ship under a breezeway, and the port security woman was trying to force us to direct our line out into the rain. She said, “It’s a rain forest! So of course it is raining!” Yeah, but that doesn’t mean you have to stand in it.

Back on board, I spent some time in the spa. We went to the casino for a while, but neither of us is much on gambling. So we gave ourselves $10 each. We left the casino with $14.25, so we didn’t lose much. And then last night, the café had death by chocolate. They had chocolate everything, including chocolate sushi (um…ick?). I settled on chocolate covered strawberries and bananas (so gotta get back to running after this cruise…one of our tour guides joked that the cruise policy was that we were required to eat every two hours. I haven’t been that bad, but I am sort of tired of food).

This evening we land in Victoria. I am not all that excited about it…I am sort of ready to be home. I miss the pets and our bed. We hit Seattle tomorrow morning and fly home Monday. Then it is back to FSI Tuesday.

Okay, that part I am NOT ready for. 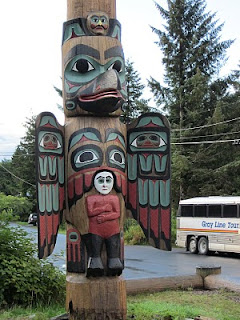 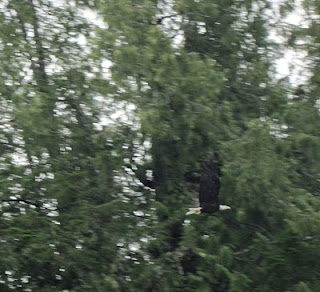 Eagle in Flight at George Inlet