This piece was in today's Washington Post. So much of the debate of "fortress embassies" has portrayed the issue as either-or. We can either keep our diplomats safe or we can have attractive, inviting embassies. And much of what I have seen has fallen on the side of "we are really being paranoid...we need to be more inviting." Sorry, but since I don't get a gun or bullet-proof vest, and since terrorists DO like to target diplomats overseas, I like safe embassies.
So I am really glad to see the new design is both safe AND inviting.
Because like our soldiers, I know that serving my country is dangerous. And like them, I want to be able to control the amount of danger as much as possible. I suspect my dad and wife would agree! 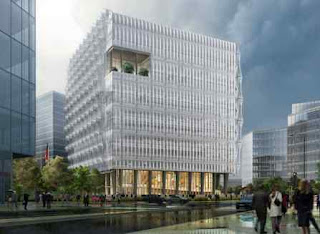 The State Department has announced that a Philadelphia-based architecture firm has won the closely watched competition to design the new U.S. Embassy in London. KieranTimberlake, which also designed an innovative and environmentally sustainable structure for Washington's Sidwell Friends School, beat out three other major architectural firms.

The design calls for a secure and environmentally efficient glass cube set atop a colonnade in a landscape with a pond and pathways open to the public. Speaking from London, architect James Timberlake called it "an urban building in an urban park."

The other finalists, in a process that began with 37 entrants and was winnowed to four over the past year and a half, were Pei Cobb Freed & Partners, Morphosis Architects and Richard Meier & Partners Architects.

The decision to open the design selection to competition is rare but not unprecedented -- this is the fourth time the State Department has done so -- demonstrating the importance of the London embassy to the United States' long-standing relationship with Great Britain. It might also reflect the State Department's desire for fresh and deeper thinking about how to design aesthetically pleasing but secure facilities. In recent years, the government has relied on standard embassy designs as it worked to rapidly replace or upgrade overseas facilities in the nervous post-2001 environment. Many of those were criticized for being fortresslike, forbidding, and isolated from their surroundings and the people they serve.

The choice of the KieranTimberlake design suggests that the more open process has yielded exactly what the State Department's Bureau of Overseas Buildings Operations was looking for: "a modern, open and secure" building that was sensitive to London's architectural context.

Set on a site of almost five acres on the south side of the Thames River, the new structure will be positioned on an angle to the surrounding streets. A semicircular pond will function as a protective moat along the Thames side, while a spiraling landscape to the south sets the building away from potential car or truck bombs. A complex envelope of blast-resistant glass and a polymer skin (known as ETFE) will provide both security and energy efficiency while shading the building on its sun-exposed sides.

"I have to be careful in talking about specific security requirements of this particular building," Timberlake said. "But the glass skin is quite robust."

It also helps the building, which is estimated to cost about $500 million, put a transparent face to the city and maximizes natural light for workers inside. Photovoltaics in the building's skin and on its roof will generate electricity.

Design drawings show a cube that shimmers and dissolves in muted rhythms both vertically and horizontally. The spiraling landscape continues as a motif inside the building, culminating in the "ever more focused, secure and enclosed center atop the structure."

Jane Loeffler, author of "The Architecture of Diplomacy," a history of U.S. embassy facilities, praised the selection.

"They really want to make this a positive statement, and it looks like they are doing that," Loeffler said. "It is very fashion-forward, but it's not just trendy; it has rationale and science behind it."

The KieranTimberlake design wasn't the most radical in terms of its basic shape and silhouette. That honor belonged to the Morphosis proposal, which placed an irregular, curving and angled form on top of columns. But the Morphosis drawing (provided by the State Department) suggests a complicated landscape of perforated grassy terraces and green roofs that would have put blank walls to the street in some locations. Richard Meier & Partners proposed a sleek assemblage of vertical and horizontal planes defended by security bollards. Pei Cobb Freed offered a more basic curving glass and metal hat on top of a dull plinth, with a high fence around the perimeter.

The KieranTimberlake design is more formally pure, and effective at maintaining openness.

Self-reliant in a crisis

The winning design's emphasis on sustainability isn't just trendy architectural positioning, argued Loeffler. It is symbolically important as a diplomatic gesture. It also demonstrates how sustainability and security are interwoven in embassy architecture. A structure with its own water and energy sources isn't just kind to the environment, it's also self-reliant during a crisis. Loeffler cites the U.S. Embassy in Haiti -- an exemplar of the State Department's recent more fortresslike structures -- which withstood last month's devastating earthquake and has kept functioning through the aftermath.

The challenges faced by the architects were profound. The new embassy, which is slated to break ground in 2013 and be completed by 2017, replaces the still controversial architectural landmark designed by Eero Saarinen at Grosvenor Square (opened in 1960). Aging and overcrowded, the Saarinen building's close alignment with the streetscape, and other structural issues, had made the building increasingly problematic and cluttered with security add-ons. But the decision to find a more secure site for a modern embassy was fraught with sentiment: The relocation to the south side of the Thames not only exchanges a tony north Thames address for a gritty south side one, but it breaks a tradition of American diplomacy at Grosvenor Square dating to John Adams's appointment as the first U.S. minister to the Court of St. James's in 1785.
The Nine Elms site, as the new location is known, is in an "industrial, or post-industrial" part of the Borough of Wandsworth, according to Timberlake. The goal, he said, is to help Wandsworth catalyze development in the area.

The competition for the London design follows more recent competitions to design embassies in Beijing (won by Skidmore Owings & Merrill in 2001) and Berlin (won by Moore Ruble Yudell in 1995). Before that, the first competition for a U.S. embassy was also for London, in 1956, which Saarinen won. The Saarinen building was sold to a Qatari real estate development company in December, though the United States will continue to use the structure until relocating to the new one.
Posted by Digger at 10:17 AM

I've quoted you and linked to you here: http://consul-at-arms2.blogspot.com/2010/04/re-new-design-for-london-embassy.html