For the third year, in honor of Pride month, the State Department has published biographies of some of the Department's LGBT employees.

First up is Larry Pixa. 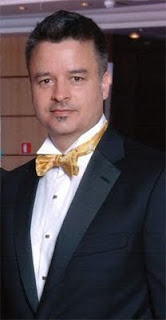 Lawrence (Larry) Pixa is an economic affairs cone FSO en route to his first post as consular officer in Montreal, Canada. He is currently in French language training at FSI. He happily claims the U.S. Foreign Service as his fourth career and long term dream come true.

Just prior to working for Microsoft, Larry was Chief of Party on a 2-year USAID technical implementation project in Kyiv, Ukraine. Working directly with the National Bank and the Ministry of Justice of Ukraine, Larry managed a technical deployment enabling secured lending for the private banks. Larry also consulted on related work in the Republics of Kyrgyzstan, Moldova, and Poland.

Larry holds a master of arts degree in international relations from George Mason University and a bachelor of science degree in language & linguistics from Georgetown University. Larry learned Spanish as a high school exchange student in Cáceres, Spain and also speaks French, Russian, and German.

Larry is a former army brat born and raised in Germany. He joins the Foreign Service with his life partner of over 20 years and their wire hair fox terrier, Lyudmila, adopted while living in Ukraine.
Posted by Digger at 4:42 PM

Finally. I've been waiting for the DoS list of most eligible bachelors ;-) Okay okay, where do I sign up to be an EFM?