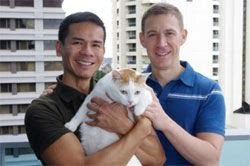 James “Andy” Ball is serving his fourth tour, and is the general services officer at the U.S. consulate general in Sydney, Australia. He is accompanied by his partner of 17 years, Agustin “Augie” Paculdar, who is the cultural liaison officer. Previous postings include Manila, Mexico City, and Washington, D.C.

They remember the challenges when SSDPs were member of households, and the uncertainties it brought. However, now that Augie is an eligible family member (EFM) that has opened up meaningful opportunities to contribute to the Department’s mission. Augie was the first SSDP to begin receiving benefits and protections as an EFM, and they are both grateful to Secretary Clinton for improving their lives in immeasurable ways. Augie has passed the Foreign Service exams and is on the register so possibly very soon Andy and Augie will face a new set of challenges as a tandem couple.

When they are not both working at the consulate, Andy and Augie are in the waters of Sydney Harbor as avid rowers on a dragonboat team. They have competed in the Pan Pacific International Games, the New South Wales State Championships, and the Australian National Championships. Prior to joining the Department, Andy was a US Air Force captain and worked on Capitol Hill. He received his BA from Vanderbilt and was born and raised in Tallahassee, FL. Augie also worked on Capitol Hill, and received his BA from Harvard and his MBA from the University of Southern California. He is a native of Los Angeles, CA. Their cat, Salcedo, is native to the streets of Manila.
Posted by Digger at 8:46 AM