Just a reminder. Sadly, the deadline for non-USG folks to RSVP has passed...hope you made that call early! 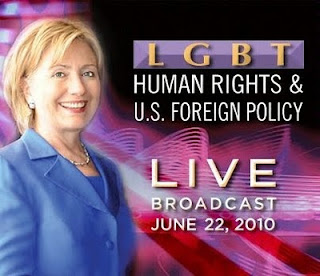 Secretary of State Hillary Rodham Clinton and U.S. Agency for International Development Administrator Rajiv Shah will deliver opening remarks on “LGBT Human Rights and U.S. Foreign Policy” at an event co-hosted by State's Office of Civil Rights and GLIFAA, the organization for Gays and Lesbians in Foreign Affairs Agencies, on Tuesday, June 22 at 11:00 a.m., at the Department of State.

The event is part of LGBT Pride Month celebrations at the U.S. Department of State and USAID.

The event will be open to credentialed members of the media and can be watched live on http://www.state.gov/.