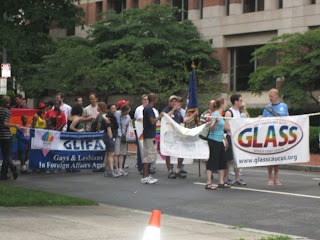 Those in DC might be aware that Saturday was DC's 33rd annual Gay Pride parade. GLIFAA (Gays and Lesbians in Foreign Affairs Agencies) participated in the parade and had a booth in the festival the next day.

There were less than two dozen of us who marched in the steady rain, but I think all of us were filled with pride when we passed the announcers booth as they called the name of the organization and said "On the front lines representing you and the country's diplomatic interests in embassy's and consulates around the world."

"On the front lines representing you and the country's diplomatic interests in embassies and consulates around the world."

That would have choked me up. I didn't see the booth on Sunday, but perhaps it was the heat :) Thanks for being visible!

Digger -Glad to see the FS represented. I hope you had fun! Backlist's recent post really made me sad. My best friend is a same sex trailing spouse, and although I can't claim to know what it feels like being in both your positions, I sympathize deeply with the difficulties and the challenges that you have in the FS.

My friend is a loving husband to his partner, a loving father to his kids and like me stays up and worries whenever a member of his family is sick or in pain. He takes care of his family as I do with mine, he worries about their safety as I do with mine. He is no different from the FS spouses I know and care about, and yet he is different under the regulations that governs our lives.

It definitely chocked me up.

I am hoping next year's booth will be more visible. This year GLIFAA shared a booth with Federal GLOBE, and they took much of the space, so our banner was a bit hidden. Next year, I'd like to see us have HR's blessing to recruit (we didn't seek it this year) plus I'd like to see us sell t-shirts again.

And Diplopundit,
Thanks for your kind words. I find that most people in the service feel that way, but the powers that be keep the institutional discrimination in place. The whole reason I joined the service was that I couldn't see spending a 20-year career as my partner's MOH, given that I couldn't even get more than a tourist visa in most places and she would earn 16-35% less than her collegues of the same rank because we would have to pay for my health insurance.

Here is to quick passage of the Domestic Partnership Benefits and Obligations Act, so we can stop losing good people like Backlist at a time when we can ill afford it.

Rock On! So glad to see everyone out there supporting the rights you duly deserve!

Awww- yay! Happy pride! Looking forward to marching with you next time I'm back in DC.