Not An Auspicious Start To The New Year

This is not how I had hoped to start the New Year. It is a reminder how dangerous this job can be. My condolences to the officer's family and the family of his driver.

KHARTOUM, Sudan (CNN) -- An American diplomat working toward restoring peace in war-torn Sudan was shot and killed along with his driver early Tuesday as he headed home from a New Year's party in the Sudanese capital, his family said.

U.S. officials are working with Sudanese authorities to determine whether it was a targeted attack or an isolated incident.

His sister said he had telephoned his mother Monday to wish her a happy new year, and mentioned he was planning to attend a party.

Hours later, the family received a call from U.S. officials that Granville had been shot sometime after midnight local time. Sudan is eight hours ahead of Eastern time.

The Sudanese Interior Ministry identified the driver as 40-year-old Abdel Rahman Abbas and said the car was heading to a western suburb of Sudan's capital, The Associated Press reported. Abbas, who was killed instantly in the attack, was employed by the U.S. Embassy, said Walter Braunohler, a spokesman for the embassy.

Granville's sister, Katie McCabe, said she believes hospital workers did not notice that her brother had been shot in the stomach -- in addition to the hand and shoulder -- which caused fatal internal bleeding.

Braunohler said it was too early to determine the motive for the attack.

"At this point we're not ruling anything out, but we don't know," he said.

Sudanese Foreign Ministry spokesman Ali As Sadeq downplayed the idea that the diplomat had been targeted, saying the pre-dawn shooting was the result of a "street argument."

He said the streets of Khartoum were packed with cars leaving New Year's celebrations and an argument broke out between people in two cars, one of which was carrying foreigners.

The argument escalated and one of the Sudanese fired on the car carrying the foreigners, resulting in the casualties, he said.

Sudanese security forces are searching for the gunman, Sadeq said.

Granville's family said he became passionate about Africa after helping build a school in a rural Cameroon village as a Peace Corps volunteer.

"John's life was a celebration of love, hope and peace," the statement said. "He will be missed by many people throughout the world whose lives were touched and made better because of his care."

He is survived by his mother, sister, nephew and nieces.

Jane Granville told CNN that her son was aware of the dangers in the countries where he worked.

"John said, 'Mom ... if anything happens to me over there ... just know that I was doing what I loved in helping those people," she said. 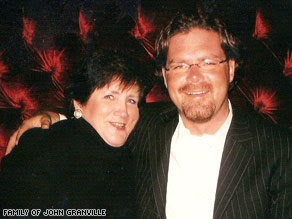