Today is Israel's annual Holocaust Remembrance Day. At 10 am, they sound an eerie siren and have two minutes of silence to honor the memory of the six million people who were killed by the Nazis during the Holocaust.

The observance of the day began last night at sundown, when many cable stations stopped broadcasting and put up memorial messages. During the siren, which can be heard throughout the city, everything stops, even traffic. People stop their vehicles in the middle of the road and stand next to their cars for the duration of the siren. 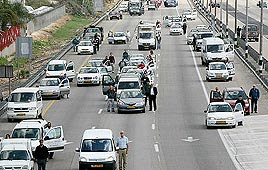