You may or may not have gathered that last week, I was away. I managed to get in a few dumping DOMA related posts in, but posting using my ipad is nearly impossible. But not posting on something as relevant to our lives was even more impossible.

The reason for my absense during that week was that my wife and I were on our long-awaited (but too short) vacation to Norway.

Norway is amazing (but really, really expensive!), so I thought I would share a bit of it with you. I'll break this into several posts so you can read or not as much as you like.

We flew into Oslo on the 23rd, and M had found us a hotel right inside the Grand Central train station. This meant that coming from the airport was an easy 20-minute train ride and we didn't even have to leave the station to go into the hotel (but of course, we did, because of course we couldn't find it at first and of course it was raining. AND I had no rain gear). The hotel was funky, with weird wall art and very stark feeling rooms. I liked it a lot, but it was a bit too warm for my liking. Something I discovered in Norway is that there are a lot of places with devices on the wall that would seem to indicate they have air conditioning but the device is just for decoration. The other thing I learned was that I can never go home to the South again. Because temps in the 70s are now hot. 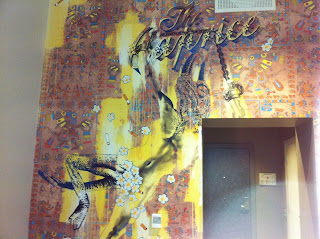 Since we got in reasonably early, we decided to walk around Olso a bit. The town is pretty interesting, and the Akershus fortress is pretty cool. Of course, lots of stuff was closed or closing because it was Sunday, but we did get to wander around the fortress. 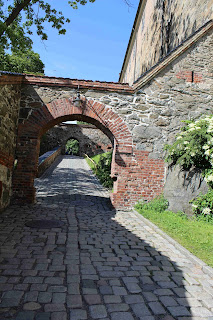 We headed the next morning to Bergen on the Norway in a Nutshell tour. We took the Bergen train to Mrydal, then the Flåm railway to Flåm, then a fjord cruise to Gudvangen, then a bus to Voss, and finally back onto the Bergen train to Bergen. Some of the views we got were amazing.
﻿ The Bergen train is great...comfortable, reserved, confortable seats. Not so much for the Flåm railway. Our train was ever so slightly late, meaning the one car for those not with some tour group was full. We managed to find seats, though not great ones, right behind the standing area. And I spent much of the trip worrying that the Japanese guy who seemed to be making a film of the trip for Japanese television (seriously, not a random tourist) was going to have his head snapped off by the tunnels we passed through while he was hanging out of the window. Being covered in filmmaker parts was not how I hoped to start my vacation. Luckily, we arrived safely, and some of you in Japan may one day see me on tv, as he occassionally filmed our car. I wonder if I will get royalties?

The fjord cruise was lovely. Some of the little towns along the way simply don't look real, and some of the isolated homes on rock outcrops look so stark and yet picturesque. The rain did put a damper on it, but luckily we had seats under a cover and could take turns venturing out for pictures during breaks in the rain. 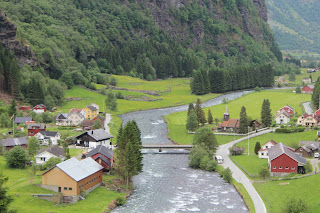 In the bathroom on the cruise boat was a sign that I have to share with you. Feel free to print it and post in any icky bathroom you have to deal with on a regular basis! 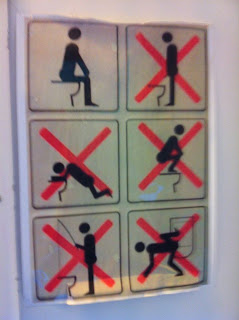 The bus trip to Voss...not so much. Taking motion sickness medicine before the trip started would have been a better ideal...I didn't get sick, but ick...and a road at an 18% grade with 13 hairpin turns, not so much fun.

But Voss is a really pretty little town, since we all know my thing for churches, I'll share a picture I took of the church there. 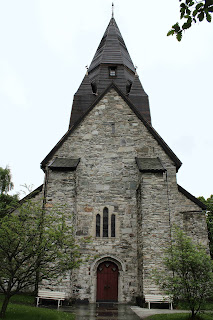 Finally, we got on the train to Bergen and were there a short ride later.
Posted by Digger at 6:48 AM

Email ThisBlogThis!Share to TwitterShare to FacebookShare to Pinterest
Labels: Norway