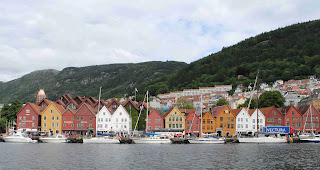 We got to Bergen Monday evening and checked into our hotel, the Det Hanseatiske Hotel. The hotel was really cute and the staff was excellent. They have two nice restaurants in the hotel, the Casa Del Toro that serves the best tex-mex I have had since moving to Estonia (not a high standard...tex-mex is absent here...but the food was pretty good!) and the Finnegaardsstuene, which is considered one of the best restaurants in town. We had to make reservations there because they were always packed.

We wandered around the town a bit the first night, but most things were already closed. Like Tallinn's Old City, cruise ships bring in hoards of tourists during the day, but it really quiets down at night. But since we had several days in town, we weren't in a super hurry.

The next day, we headed up (in the rain...apparently Bergen gets like 260-some days of rain per year) to visit the local Stave Church. This particular church, Fantoft Stave church, was built in Fortun in Sogn in 1150 and moved to Fantoft in 1883. Sadly, the church was totally destroyed by fire in 1992 but was been rebuilt to look the way it did before the fire. It is a cool, old-looking church, but it feels new. Which made me sad. 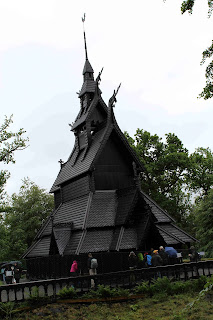 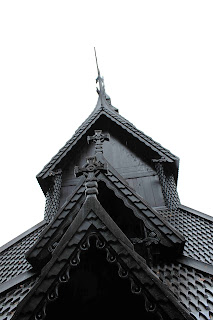 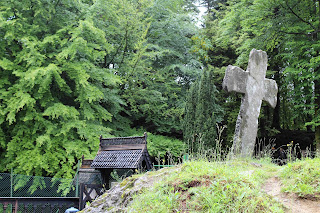 The interior is the part that looks most obviously new. One cool thing is the lepers window, seen below. Lepers were not allowed in the church, but could received communion through the window.﻿ 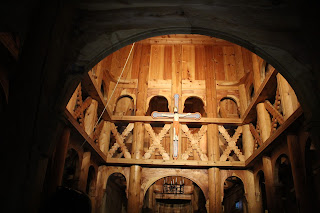 ﻿ ﻿ After visiting the church, we checked out the Rosenkrantz Tower and Håkon's Hall. Parts of the tower was built in the 1270s, and it was the home of King Eirik Magnusson, the last king to hold court in Bergen, until he died in 1299. The current form incorporated that building and one other when in the 1560's the governor of Bergen Castle, Erik Rosenkrantz, built it at the order of King Frederik II. There is even a dungeon in the cellar that served that purpose from the 15th to 19th century. 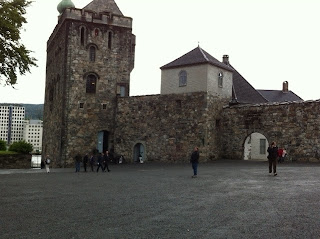 Håkon’s Hall is 750 years old, and was built by King Håkon Håkonsson as a royal residence and banqueting hall. I could tell you more, but the cat barfed on the copy of the info guide I picked up on it. Sigh.


Both the tower and the Hall were damaged when a German ammo ship exploded in the harbor in 1944, but both have been restored.

Next we wandered around the town for a bit...for a few moments it was rain-free and I was able to get some pictures of the cool old buildings there. 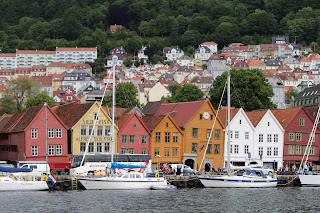 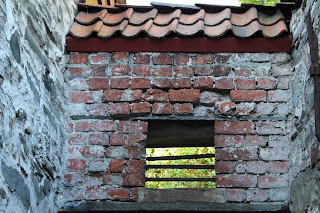 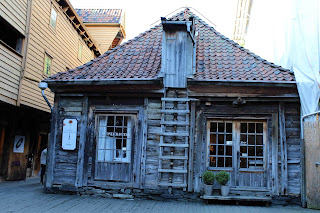 The next morning, we opted for more fjords, taking the White Lady four-hour fjord tour. The tour was a lot of fun and really relaxing. Finally I got to see the kinds of fjords I was looking for...the ones with the really steep walls! Amazingly beautiful. 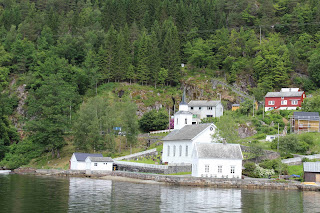 Of course, this is also the day that the DOMA ruling was released. I had been watching the clock all day, because I knew it would come in at 4 pm our time. But I have already talked about my reaction that day.

For our last day in Bergen, we took the funicular up to the view atop on of the seven mountains surrounding Bergen. We hiked a bit around the mountain, seeing some breathtaking views as well as a few trolls, and giving my part mountain goat wife the nature fix she was looking for. 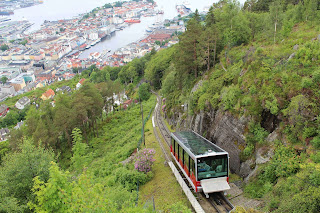 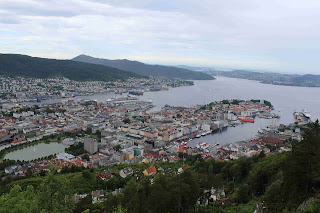 That night, we ran into friends from the embassy, who purely by coicidence, were vacationing in Bergen as well. We had a nice sushi dinner together, and we headed back to Oslo the next morning.

Email ThisBlogThis!Share to TwitterShare to FacebookShare to Pinterest
Labels: Norway

Enjoyed the posts on Norway--it's always been on my list to visit. And wow, $100 for a simple meal--I hope it was good!

FYI, I passed my FSOT so now hoping to sway the QEP with some brilliant essays!