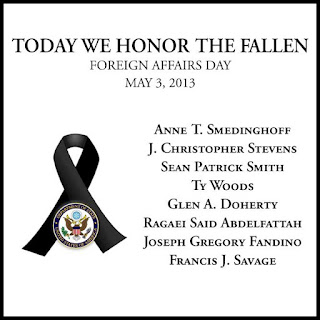 I send greetings to all those celebrating Foreign Affairs Day 2013 at the Department of State, the United States Agency for International Development, and our Embassies, Consulates, and missions around the world.

Today, we honor Foreign and Civil Service professionals who are the backbone of American diplomacy and development efforts. From strengthening our alliances and forging strategic partnerships to preventing violent conflicts and halting the spread of deadly weapons, you endeavor to promote democracy and security, guard against disease and poverty, and champion human rights while fostering mutual understanding between peoples. Your impact is lasting and your work embodies the ideals that have made our Nation a beacon to the world.

On Foreign Affairs Day, we honor those who made the ultimate sacrifice while serving our country. We solemnly remember Anne T. Smedinghoff, a Foreign Service Officer, who was killed in Afghanistan on April 6, 2013, as well as the four men who lost their lives on September 11, 2012, in the terrorist attack in Benghazi, Libya: Ambassador J. Christopher Stevens, Information Management Specialist Sean Patrick Smith, and Security Agents Ty Woods and Glen A. Doherty. We also remember Ragaei Said Abdelfattah, a Foreign Service Officer with the United States Agency for International Development, who was killed in Afghanistan on August 8, 2012.

The names of these eight devoted individuals will join those of 236 other Foreign Service members on the Memorial Plaque, forever honoring their legacy of service to the country they loved.

I join Secretary Kerry in saluting the Foreign Service members who have given their lives in service to our Nation. I offer my thanks to all members of the diplomatic service and their families for their selfless contributions to making our world more peaceful, prosperous, and secure for all.

Barack Obama
Posted by Digger at 6:53 AM

I just found your blog through the Foreign Service list. Thanks for sharing your perspectives and stuff on life in the foreign service! You have some interesting stuff on here.