International Day Against Homophobia and Transphobia

May 16, 2013
PRESS RELEASE: U.S. EMBASSY FLIES RAINBOW FLAG ON MAY 17 FOR THE INTERNATIONAL DAY AGAINST HOMOPHOBIA AND TRANSPHOBIA 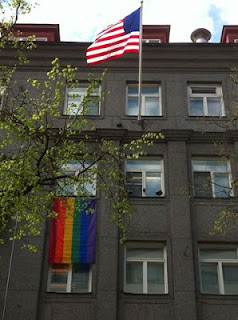 To mark the International Day Against Homophobia and Transphobia (IDAHO), the U.S. Embassy in Tallinn on May 17 will display the rainbow flag on the Embassy building at Kentmanni 20, Tallinn. IDAHO is an annual event celebrated internationally to counter homophobia and raise awareness of the human rights discrimination faced by Lesbian, Gay, Bisexual, and Transgender (LGBT) individuals.

“Flying the flag,” Ambassador Levine said, “is a simple statement of our support for the LGBT community and its struggle for equal rights.” Noting the substantial progress being made, Ambassador Levine added that “much of the world has come to understand that sexual orientation is not a choice, that who you love is not a political statement and that personal prejudices, not matter how strongly felt, cannot be used to deny equal protection under the law. IDAHO is a day to celebrate acceptance.”

This year, IDAHO will be observed in almost 90 countries. In Estonia, the Estonian LGBT union will mark the day with events in Tallinn and Tartu, including a panel discussion at 14:00 in Tallinn on the proposed partnership law. The panel discussion will be opened by Ambassador Levine.
Posted by Digger at 5:08 AM

We were a bit more low key. We screened "Milk" - mainly for students of the English department of the local university - followed by discussion with a Fulbrighter and an English Language Fellow. Next month the Ambassador is hosting a small reception for Pride Month. While homosexuality isn't illegal here (as it is in other countries of this region), there is societal stigmatization and it's not much discussed.

Interestingly enough, at least one local media (can't remember if it was print or online) choose that aspect of our Human Rights Report to highlight (negatively: e.g. "we don't need your western values") - despite the fact that it was only four sentences of a fairly lengthy report.

Beautiful words from the Ambassador!

It's interesting to see how different embassies around the world can be based on the attitudes of the host country. It is safe to say, there were no rainbow flags hanging from Embassy Kabul. Of course, not many outside of those who work here would be able to see them anyway.