Deputy Secretary of State James B. Steinberg will present the 2010 Associates of the American Foreign Service Worldwide Secretary of State Award for Outstanding Volunteerism Abroad to the six winners from different geographic regions at a ceremony on Thursday, December 2 at 10:00 a.m. in the Benjamin Franklin Diplomatic Reception Room at the Department of State.

The awards recognize U.S. Government employees; family members, including domestic partners; and other members of household at embassies and consulates who gave exceptional volunteer service to their communities, mission or host country, or rendered outstanding assistance in emergencies. Among this year’s award winners are Mindy R. Michels and Melissa E. Schraibman, who were serving in Tirana, Albania.

FS employee Schraibman and her partner Michels helped a small group of Albanian activists to create a vibrant and active lesbian, gay, bisexual, and transgender (LGBT) community in Albania where none had existed.

Violence and discrimination on the basis of sexual orientation was common in Albania. But through the collaborative efforts of this newly-formed group, Mindy and Melissa helped establish a grassroots organization, Alliance Against LGBT Discrimination. The couple met each week with the members of the Alliance and provided support, inspiration and skills development. They hosted strategic planning sessions for the new NGO, defining its identity, core values and mission. Over time, Melissa and Mindy trained and mentored the leadership team in grant writing, membership recruitment, press strategies, organizational development, and grassroots activism. 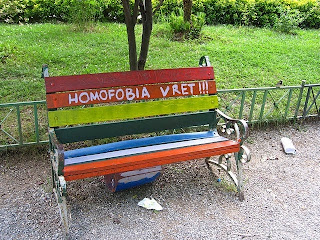 This bench reads "Homophobia Kills" in AlbanianThe Alliance has succeeded in creating a social and activist network that transformed the lives of the people it reached. There are now weekly discussion groups, weekly social events, regular grassroots actions, and a very active Facebook group with over 1100 members. Mindy also participated in an ongoing working group sponsored by the Dutch Embassy on LGBT issues. As part of the group, she assisted in drafting a comprehensive non-discrimination law in Albania covering everything from discrimination on the basis of religion to discrimination on the basis of sexual orientation and gender identity.

The volunteer accomplishments of Mindy and Melissa showcase what volunteer service can achieve on behalf of transformative diplomacy.

You can check out an album of their photos here.

This year also marks the 20th anniversary of the establishment of the SOSA awards by Secretary of State and Mrs. James Baker. To honor this milestone, the Associates of the American Foreign Service Worldwide have created an on-line publication entitled “FS Volunteers – 20 Years of Grassroots Diplomacy.” The publication documents the contributions and outstanding volunteer service provided by over 400 Foreign Service employees and family members at U.S. embassies and consulates all over the world. The publication, including a brief synopsis of the volunteer activity that earned all of this year's award winners their awards can be found at here.

The award ceremony is open for press coverage. Members of the press wishing to attend should contact Public Affairs Officer Brenda Greenberg at 202-647-4282.

Media representatives may attend this award ceremony upon presentation of one of the following: (1) a U.S. Government-issued identification card (Department of State, White House, Congress, Department of Defense, or Foreign Press Center), (2) a media-issued photo identification card, or (3) a letter from their employer on letterhead verifying their employment as a journalist, accompanied by an official photo identification (driver’s license or passport). Those who do not have a State Department building pass should allow adequate time to clear through security at the 23rd Street entrance.
Posted by Digger at 4:39 PM