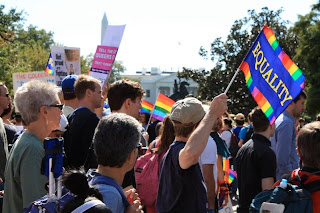 I am really disappointed that I didn't get to attend the National Equality March on Sunday. It sounds like it was great, the kind of marches I remember from when I first came out in the mid-80s. We were angry and demanded equal treatment. But as tolerance increased, so did many marchers' apathy. "We still aren't equal, but at least most people don't try to kill us any more." Pride marches lately have seemed more like parties than protests. I am not saying there isn't a place for that, just that we need some young blood and good old fashioned activism.
But I had to do to see my grandmother, who is very ill. My wife did march, however, along with a contengient from GLIFAA (Gays and Lesbians in Foreign Affairs Agencies) that included some newly minted Foreign Service Officers. New blood. Good old fashioned activism. It makes me really happy.
I know the GLIFAA folks took some shots in front of the White House, and I'll try to post them when I can.
The Washington Post had a nice editorial today calling for leadership from both ends of Pennsylvania Avenue on addressing our issues. There are those who say that those of us calling for full equality now are not as politically aware as those who were present for the President's talk at HRC. But I can assure you, my voice is in there calling for FULL EQUALITY NOW, and I also assure you, as an FSO, I dare say I am at least as politically aware as anyone in the audience.

Leadership on Gay Rights
President Obama isn't the only one falling short.

FULL EQUALITY for gays and lesbians is the civil rights issue of our time. Men and women who want to preserve and protect the ideals of this nation are being booted from the military because of who they are. Same-sex couples who seek the recognition of their relationships that their heterosexual counterparts take for granted are denied the rights and responsibilities that come from civil marriage. Ending these and other forms of institutional discrimination based on sexual orientation requires leadership. Pity there's not enough of it coming from either end of Pennsylvania Avenue.

President Obama ran as a candidate of change. Perhaps no other community took that to heart more than the gay community. Mr. Obama promised to end "don't ask, don't tell" policy, which prohibits members of the military from serving if they are openly gay. He promised to repeal the so-called Defense of Marriage Act (DOMA), which defines marriage as between a man and a woman and denies married same-sex couples more than 1,100 federal benefits available to opposite-sex couples. There's been no visible movement on either pledge.

As he has in the past, Mr. Obama said the right things on gay rights at last weekend's fundraising dinner for the Human Rights Campaign. "I'm here with you in that fight" for equality, he said. "For even as we face extraordinary challenges as a nation, we cannot -- and we will not -- put aside issues of basic equality." On gays in the military, Mr. Obama mentioned his discussions with the Pentagon, the legislation pending in Congress and stated plainly, "I will end 'don't ask, don't tell. That's my commitment to you." On repealing DOMA, the president said, "I believe strongly in stopping laws designed to take rights away and passing laws that extend equal rights to gay couples."

Frustration with Mr. Obama and the lack of progress in fulfilling his pledges on gay rights were evident at Sunday's National Equality March. But why is he the only target? Overturning "don't ask, don't tell" and DOMA require legislation. House Speaker Nancy Pelosi (D-Calif.) and Senate Majority Leader Harry M. Reid (D-Nev.) have been content to sit on the sidelines while Mr. Obama takes the hits. This can't continue. Ms. Pelosi and Mr. Reid must exert the necessary leadership in their respective chambers to pass bills the president has promised to sign. Until then, they deserve as much criticism and blame as Mr. Obama for impeding the long march to equality.
Posted by Digger at 10:57 AM

Oh man, I knew GLIFAA had to be out there, but I didn't see them - shame! I was by the retired military officers/Knights of Columbus group. I'm sorry you missed it - it was lovely, very inspiring. I was surprised by Barney Frank's comments ("a waste of time"). Even if the legislative impact isn't as strong as hoped, the sheer camaraderie and feeling of mutual support was palpable. The entire afternoon, as I and my friends ate lunch on Penn, we saw people leaving from the march - high fives, smiles, and cheerful head-nods all around.