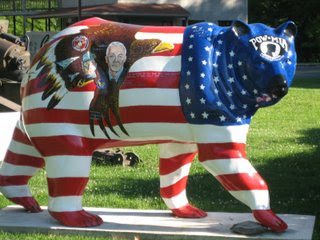 I realized yesterday as I was leaving work (and telling the guard that I would be back today), that with the exception of my first (when I was in language training), I have worked every 4th of July since joining the Foreign Service.

Overseas, that is a given. The 4th there is really about presenting America to the world. I didn't care for it much, because my idea of celebrating my country's birthday generally involves hamburgers, hotdogs, watermelon and fireworks. Overseas, you wear business attire, often in sweltering heat, and eat generally nasty finger food (was that samon wrapped in fried egg?). But it is cool when the locals tell you "congratulations."

Since coming back to the states, I have still not managed to escape working the 4th, since my job is a 24/7 deal. At least this year, I am on the afternoon shift, so I won't (unlike last year) be listening to the booming fireworks from the national mall while watching them on a two second delay on tv at work.

On a side note, one of the members of GLIFAA (Gays and Lesbians in Foreign Affairs Agencies) put together a list of all of the incentives offered to officers to entice them to serve in Iraq that are NOT available to those whose spouses are same-sex partners. They include:

And that is aside from the host of other benefits that opposite sex spouses get (like access to health units, evacuations, diplomatic passports, visas....).

So on this July 4th, I just want to thank EVERYONE who serves this country, both in the military and in the Foreign Service, even those who serve while being treated like second-class citizens.
Posted by Digger at 11:58 AM

Sorry to hear you're stuck inside today! I hope you and M have a lovely holiday after hours!

Hey there - I saw this article and thought of you:

We should remember to be thankful for the fact that this country allows people to be who they want and express themselves, even if it is a little late on legal rights.

On July 4th, I was in front of the white house, and saw tons of protesters. What a great country.