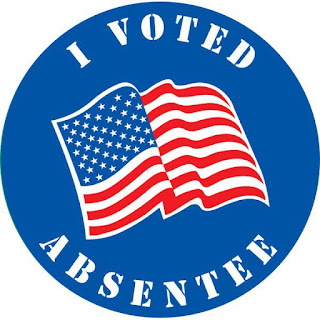 I am so ready for elections to be over. Beyond ready.

Not because I don't care who wins. I do, though don't ask me who I am voting for because I won't tell you. I have to work for whoever wins.

And not because I am tired of all the campaigning. That would be true if I were in the U.S., but really, you don't hear much of it overseas. It is a major advantage of being overseas at election time. My only "American" television is AFN (American (formerly Armed) Forces Network), the television programming for the military. And like me, they work for whoever wins, so no campaign ads. In fact, no real ads at all unless you count "never shake a baby."

No, the reason I am ready for it to be over is that I have SO MUCH to dobetween now and then. (Voting is not among those things...that I took care of a while back so I could make sure my ballot made it home in time to count.) Elections are a great time for Public Diplomacy officers because it is a ready made topic to reach out to foreign audiences and explain America, especially American democracy.

Because when you really think about it, that a country can have a peaceful, predictable change of power every 4-8 years is pretty incredible.

So we do a lot of programming around it. We do tons of school visits explaining what is happening and what will happen after the fact. In our embassy, that has meant lots of heavy lifting for my section, but for other sections too. We have been trying to get as many Americans as possible out and talking, and we have had to put together good materials for them to use in their presentations. We are particularly working with our Regional Outreach teams (teams of one American and one local staff member assigned to each of Estonia's 15 counties) to get the word out. And they have been doing an awesome job at it.

We are in the final stretch now. We will be going to the north east part of the country to do a marathon two days of talking to schools and other programming surrounding Narva's America Days.

And then of course, there is election night/morning.

Every embassy has a big event and we are no exception.

We are not pulling an all-nighter...some posts in the region are and others aren't. We are, however, getting to the event location at o-dark-thirty so the event can start while some of the polls are still open.We are expecting hundreds of Estonians, from middle school students to members of Parliament, to show up. We'll have food, reporters, moderators explaining the elections, televisions running in the background, and more. It will be great! And exhausting. In fact, I am already tired.

I'll sleep when it is all over.