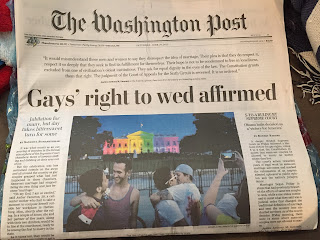 The week following the Orlando massacre was rough for me. The slaughter of 49 of my gay brothers and sisters and the injuring of another 52 more two weeks ago today passed relatively unnoticed at our embassy, and I found that personally devastating. Our Ambassador, whose leadership I greatly admire, was out of town. And consequently, we didn't have a condolence book. We were told at country team that we could have one if we wanted but that the Charge' didn't have strong feelings about it.

I nearly walked out of country team.

I am sure no harm was meant by the comment, but it harmed me. And perhaps anyone else who was LGBT, or had LGBT family or friends, or who had been touched by gun violence, or who just cared that their fellow Americans were mowed down by a madman able to get an assault rifle.

And then I had to fight to get our local LGBT activists to be ALLOWED to have a memorial vigil at the embassy. To be ALLOWED to light 49 candles for those who were lost. I was devastated all over again.

But several healing things happened since then. First, we did have the memorial. Not at the embassy like they wanted, but at least at USAID and not downtown away from the embassy. And it was really touching. 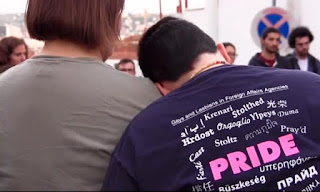 And then our Ambassador returned, and told us how sad he had been not to be with us when that happened. And how awful what had happened was and how he knew how hard it was to be so far away when this happened. And how we were lucky, because we were in a position to serve the country and to help make the U.S. and the world a better place.

And that helped a lot.

And so today I am celebrating. Because today I am reminded that it has been three years to the day since the Supreme Court ruled that the so-called Defense of Marriage Act was unconstitutional.
This is what I wrote about it at the time:

"We were on vacation in Norway when the ruling was first announced. I had been waiting for it for what seemed like an eternity. I expected it to come at 10 am Washington time on Wednesday, and it did, but I had not told my wife that this was when we would hear. She had already chastised me for watching SCOTUSblog over the past few weeks for fear I would jinx it. So I watched the clock anxiously that day and never told her I was watching the clock.

We got back into our hotel room around 4:20, or 10:20 DC time, and I immediately jumped on Facebook to see what had happened. She sat on the bed, and did the same thing, only she wasn't looking for the results. She thought we would hear the next day, because she thought the rulings were issued at the end of the day. As tears welled up in my eyes, I heard her say, "Wait, what? Did they? No..."

I said, "Honey, we are full citizens."

I didn't get up...I didn't want her to see me crying...and then she came over to me, tears streaming down her face. Neither of us had expected to cry. She had expected them to rule against us...and I had figured they would do what they did but was at the same time afraid to hope for it. I expected I would scream or dance or both.

But we both cried together. Together, apparently, with thousands of other LGBT people who felt finally accepted by their country. Who felt they were finally full citizens. Within minutes, I saw several proposals online, including one from one of my closest friends to her partner of more than 20 years. They had always considered themselves married, and she asked if her partner if she would now marry her legally. Of course she said yes. And I cried again.

One year later, I wrote about the astounding changes that had happened in that time. Marriage bans across the country were dropping like flies. We were able to go about our lives and do everything exactly the way other married couples do. And when we moved to our new house in Maryland, and went to go get our driver's licenses, one clerk accepted our mortgage document as proof of residence for my wife but not the same one as proof for me. When I went over to her at the window where she was to get the proof of car registration from her to use as proof since my mortgage paper wouldn't work, the clerk said, "Aren't you married?" When we said yes, the clerk said, "oh then she can vouch for your residency." So, yay bureaucracy?

We were finally full citizens. And I subsequently asked anyone who didn't respect my right to marriage to unfriend me, on Facebook or in real life.  But I added this:


"But before you do, I ask you to consider how you would feel if your spouse was hospitalized and weren't allowed in the room? I don't have to imagine. I have experienced it.

How would you feel if your spouse died, and you weren't allowed to bury him or her because you were a legal stranger and the law required immediate family to claim the body, even if that person was someone your spouse hated? What if you weren't allowed at the funeral? I have friends who experienced this after 20 or more years together.

How would you feel if you lost your home because your spouse died and you had to pay inheritance tax on "their half" of your home. It has happened to many gay people.

Civil marriage brings some 1,300 rights and responsibilities. Wills don't cover it. And some states could ignore even wills. And medical powers of attorney. It happened, a lot.

And hopefully it won't any more.

So maybe you still have religious beliefs that oppose marriage equality. Fine. But you don't get the right to impose those beliefs on others. Because you know what? My church believes in marriage equality. We were married in the church.

Think marriage is a Judeo-Christian ideal? Then why can atheists marry?

Think it is for procreation? Then why can the elderly and the infertile marry?

They can, because just as was determined in Loving v Virginia in 1967, marriage is about love, and it is a civil right.

And before you worry that this means your church will be required to marry gay people, it won't. A Catholic priest is not forced to marry non-Catholics. A rabbi is not forced to marry Christians. In fact, when we got married in our church, our pastor had just refused to marry a couple because they did not want to go through the required premarital counseling. Churches will still get to decide what is right for them, Just not for everyone else.

And I want to close with this, Justice Kennedy's eloquent final paragraph in the 5-4 ruling:

"No union is more profound than marriage, for it embodies the highest ideals of love, fidelity, devotion, sacrifice, and family. In forming a marital union, two people become something greater than once they were. As some of the petitioners in these cases demonstrate, marriage embodies a love that may endure even past death. It would misunderstand these men and women to say they disrespect the idea of marriage. Their plea is that they do respect it, respect it so deeply that they seek to find its fulfillment for themselves. Their hope is not to be condemned to live in loneliness, excluded from one of civilization's oldest institutions. They ask for equal dignity in the eyes of the law. The Constitution grants them that right.

The judgment of the Court of Appeals for the Sixth Circuit is reversed.

Orlando has demonstrated that we still have a ways to go. There is still so much hate in the world. But I think we are heading in the right direction. So while I still mourn, while I am still shaken over and attack that happened in a "safe place," I celebrate that we are on the right path.

And I need no further proof of that than that the Charleston Post and Courier in my home state of South Carolina, where they fought to avoid accepting marriage equality, reported yesterday that one year later, same-sex marriage is simply "routine." 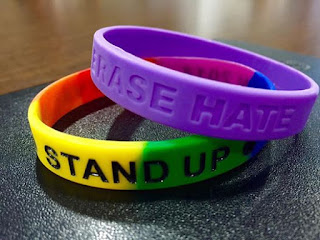