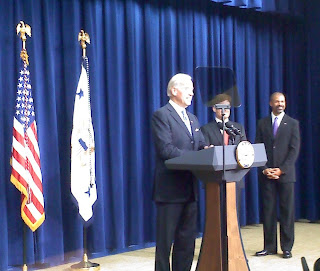 This afternoon, I attended the swearing in for Ambassador David Huebner, the first openly gay Ambassador selected by the Obama administration and the first to be confirmed by the Senate (who had no issues with his sexuality...what a refreshing change!).
He was sworn in by Vice President Joseph Biden, who commented that America is at its strongest when our full diveristy is shown.
Ambassador Huebner, in his remarks, said that he was the grandson of an immigrant coal miner, the son of a meat packer, and that he was the partner of a person of a different race but the same gender. And that in America, such a progression is not only possible, but natural.
Amen.
Best of luck to Ambassador Huebner and his husband of 20 years, Duane, as they head out to New Zealand.
Posted by Digger at 11:48 PM