From an Officer in N'Djamena

Below is a letter from Solomon Atayi, a Foreign Service Officer assigned to the U.S. Embassy in N’Djamena, Chad. The letter, written to his friends describing the recent embassy evacuation due to escalating violence and civil unrest in Chad, appears on the Department's blog, DIPNOTE, and is illustrative of the dangers Foreign Service Officers face while bravely serving our country overseas. 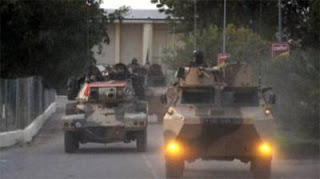 I am sending you this email to let you know that I am fine. We were evacuated on Sunday afternoon and taken to the French military base. Early this morning at 3:00 AM a U.S. military base in Germany sent a military plane to come to bring us to Yaoundé. We evacuated dependents and children on Saturday before the start of the war. They left at 4:00 AM and the war started around 9:00 AM. The Department of Defense element came to the compound to secure it. We were all divided into 2 groups. One group with the Ambassador was at the embassy, and the other group was on the U.S. housing compound. We were all put in one room, and the 11 of us were right on the floor. We could hear the fight. One tank stopped right under our wall, and each time it fired, the room vibrated. We could hear bullets flying as well as the rocket propelled grenades. The U.S. Navy Seals were on the top of the biggest building on the compound, and they had authorization to open fire if anyone came onto the compound. The fight lasted until 5:00 PM when everything got quiet for the evening prayer. Then it started again till 9:00 PM. On Saturday, it started over again. When they moved toward the President’s Palace, the looting started. We were hearing from the local guards who stayed at our separate residences how one after the other they had to abandon each post because the house was invaded by looters.

Yes, I lost absolutely everything. Everything. And I am not the only one. We all lost everything except our life. God was looking over us. Two houses on the compound got hit by strayed cannon fire. We were hearing those guns fire all day on Saturday and part of Sunday. When the rebels stopped the fight on Sunday to regroup, that's when the French troops came to the compound in armored trucks that looked like tanks and took us to their military base. The French sent a helicopter to the embassy to airlift our Ambassador, the marines and others who were at the embassy.

I went to Chad with over 2000 pounds of goods, I left with one bag that contained one pair of pants, 2 socks and 2 shirts. They even took all my figurines and all our Christmas decorations that we had been collecting for many years and were planning to give to the children.

Do I regret having gone to Chad? No. Not at all! In fact, I am ready to go back. We were doing a very good job and were helping Chadian children by donating books, backpacks, and school supplies. We were constantly in schools talking to them and helping them whichever way we could. I really loved this job. There was nothing more gratifying than to see a mother crying of joy because we donated school supplies to her child or a Catholic sister crying because we gave her a grant to help her help Chadian abused women. I loved it and will go back if I have the chance. The only thing I will do differently is that I will not spend the fortune I spent to prepare for my life in Chad.

Again, we are all fine, and I thank you all for all your prayers. Thanks to those prayers, a missile miraculously sailed straight through the Ambassador’s office, piercing both walls and exploding outside, while embassy staff were inside burning classified documents. I cannot explain how that happened, but that was what happened.

Thank you and I love you all.