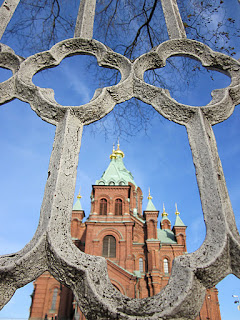 I am officially old.

Last night, I went to a Halloween party at the Marine House. Lot's of folks were there, many in costume, but I knew I was going to Helsinki today, so I left early. I knew I wanted to get a good night's sleep. Plus, I wanted to go to the party at Shimo (a bar in the Old City) with some folks tonight.

I am so not going to that party. In fact, you would be hard pressed to make me get out of my sweatpants for any reason at this point.

But visiting Helsinki was awesome.

(Well, except for the part where people were speaking Finnish. Because it sounds like Estonian, except that I could only understand about half of it. So it made me feel like an idiot.)

The ferry ride to Helsinki is only about 2 hours and costs about 33 euros. A friend and I took the 7:30 ferry (entirely too frickin' early) over and the 2:30 ferry back. We spent five hours wandering around Helsinki, visiting the market by the water, the Russian Orthodox cathedral (pictured above), and the National Museum. We walked tons of places, I took tons of pictures, and I saw more of Helsinki in five hours than I got to see of Brussels in the five days I was there.

Which is why I am going to bed right after I post this! 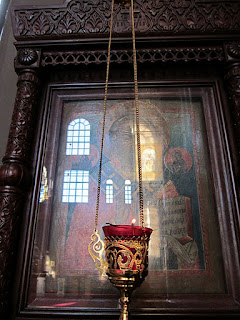 Icon inside the Russian Orthodox Cathedral 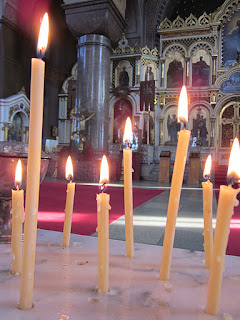 Inside the Russian Orthodox Cathedral 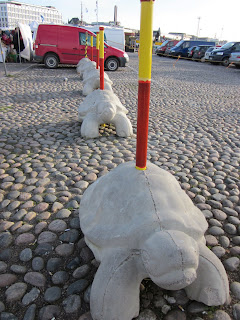 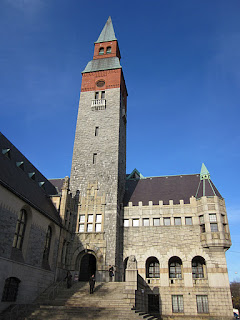 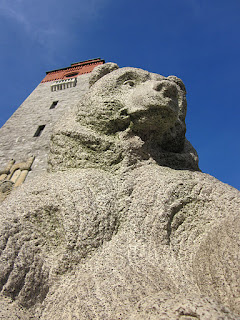 P.S. Anyone else notice how sunny it is in these pictures? It was also 50 degrees. D.C.? Snowing. Yeah, I think that is funny too!
Posted by Digger at 2:52 PM

Email ThisBlogThis!Share to TwitterShare to FacebookShare to Pinterest
Labels: Helsinki

That is so awesome! So jealous, love Helskinki!

Love the parking turtles - it's neat to see whimsical art in strange places! Helsinki looks lovely and it appears you picked an awesome day to be there!