We got a couple bits of good news yesterday.

First, we found out that the President issued an Executive Order stating he would not overturn the executive order signed by President Obama affording protections to LGBT employees of federal contractors.

THE WHITE HOUSE
Office of the Press Secretary
FOR IMMEDIATE RELEASE
January 31, 2017
President Donald J. Trump Will Continue to Enforce Executive Order Protecting the Rights of the LGBTQ Community in the Workplace President Donald J. Trump is determined to protect the rights of all Americans, including the LGBTQ community. President Trump continues to be respectful and supportive of LGBTQ rights, just as he was throughout the election. The President is proud to have been the first ever GOP nominee to mention the LGBTQ community in his nomination acceptance speech, pledging then to protect the community from violence and oppression. The executive order signed in 2014, which protects employees from anti-LGBTQ workplace discrimination while working for federal contractors, will remain intact at the direction of President Donald J. Trump.

Of course, it does beg the question of why he would need to publically state he is going to continue with a particular policy. Part of the explanation I am sure is that rumors had been swirling that an executive order was forthcoming either rescinding the Obama protections or allowing discrimination based on "sincerely held religious beliefs" (or both). The latter could still be coming. I also suspect it could have something to do with his nomination of a Supreme Court Justice to fill the seat vacated with Anthony Scalia died (you know, the one that has been vacant since February because the Senate refused to have a hearing for Merrick Garland, the Obama nominee). More on that in a bit.

The next nice surprise came in the form of a bit of support from the Democrats on the House Committee for Foreign Affairs. In a letter to the President, they expressed concern about Press Secretary Spicer's comments regarding those who supported the dissent channel message and not the President's policy, saying they should "get with the program or get out." You can read my thoughts on that here. And by the way, apparently more than a thousand people have signed it so far and more wanted to. And that is out of some 7,600 Foreign Service Officers (that number may be higher if it doesn't include FS specialists) and 11,000 civil servants. 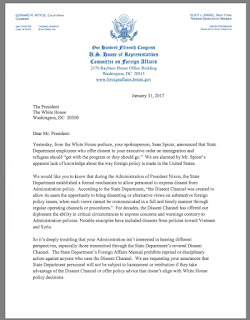 In the letter, they said:

Yesterday, from the White House podium, your spokesperson, Sean Spicer, announced that State Department employees who offer dissent to your executive order on immigration and refugees should “get with the program or they should go.” We are alarmed by Mr. Spicer’s apparent lack of knowledge about the way foreign policy is made in the United States.

We would like you to know that during the Administration of President Nixon, the State Department established a formal mechanism to allow personnel to express dissent from Administration policy. According to the State Department, “the Dissent Channel was created to allow its users the opportunity to bring dissenting or alternative views on substantive foreign policy issues, when such views cannot be communicated in a full and timely manner through regular operating channels or procedures.” For decades, the Dissent Channel has offered our diplomats the ability in critical circumstances to express concerns and warnings contrary to Administration policies. Notable examples have included dissents from policies toward Vietnam and Syria.

Please reply as soon as possible confirming that your Administration will respect the law (P.L. 96-465) governing the State Department and the treatment of its personnel.

It was signed by every Democrat on the committee. Thanks y'all!

So then came the unwelcome news, which was actually not much of a surprise (though the reality TV manner of making the announcement kind of was...I was expecting the President to give a rose to the Supreme Court nominee he selected since he invited the top two for the announcement and had clearly already made up his mind...).

The President is nominating Neil Gorsuch to be the next Supreme Court Justice.

This makes keeping the protections in place for LGBT people seem like a ploy to get our guard down (it didn't work, by the way).

According to the Washington Blade, Rep. Jerrold Nadler (D-N.Y.), called Judge Gorsuch "Justice Scalia on steroids,” Nadler said. “His record demonstrates that, if confirmed, he would rely on his conservative, originalist philosophy to overturn critical precedents and to disregard the rights of everyday Americans while bolstering protections for corporations and special interests.”

Gorsuch is definitely no friend to the LGBT community. In a paper for the National Review, he lamented that "liberals" are addicted to having the courts rather than the ballot box solve society issues including marriage equality. Never mind of course that it was the courts that overturned laws against interracial marriage at a time when 75 percent of the country opposed it. Because in a Republic, the minority is supposed to be protected from the tyranny of the majority, and the courts are generally our best defense for that. And never mind that it was the courts that desegregated schools. We should just let the majority vote on our rights, right?

He is also a supporter of so-called "religious freedom" laws and has already ruled in their favor. Those laws, in case you aren't aware, allow those with sincerely held religious beliefs to discriminate against LGBT people. This includes doctors in some cases...so I guess if you are in the ER and need a doctor with a sincerely held religious belief against you to save your life, you are out of luck. I wonder what Jesus would do...

I admit I am not overly worried, only because he replaces the most far-right judge who was on the court. But I do worry about future appointments (circle of protection around the notorious RBG please).

But I do think it shows we have to stay in, we have to fight to preserve the Constitution and our democracy, and we can't let our guard down for a second.
Posted by Digger at 5:27 AM